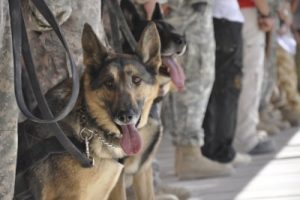 Ferrets are carnivores and don’t get any nutritional benefits from eating plants. Their diet must be high in animal protein, high in fat, and low in fiber. Ferrets have a short digestive system and a quick metabolism. Food should always be available to them. Obesity is not a concern, since ferrets only eat as much […]

Pets in the Civil War

Pets participated in the Civil War in a number of ways. There were dogs who fought on the front lines, spy dogs, hospital dogs, messenger dogs and prison dogs. Other animals served as mascots for the regiments. Despite orders to the contrary, many soldiers kept pets with them, including dogs, cats, squirrels and raccoons. General […]

Vital Statistics: Place of Origin: Wales Coat Type: medium long, soft, lustrous, dense Color: any color except chocolate, lavender & Himalayan Temperament: intelligent, loyal, gentle, good with children & other pets Where does the Cymric come from?: The Cymric is described as a mutation of the Manx. The Cymric has been around as long as […]