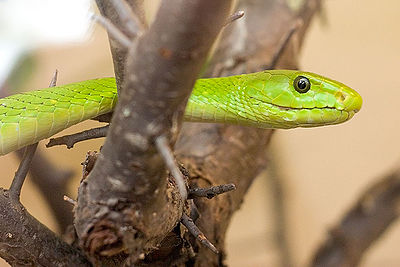 In Paris, France, scientists have experimented with the venom of the Black Mamba to relieve pain. The Black Mamba is a lethal African snake, a member of the adder family. Its venom is extremely fast-acting, attacking the nervous system and causing respiratory paralysis. It is vital for a bite to be treated as soon as possible with antivenom.

Scientists have isolated what is called peptides from the mamba’s venom and have injected it into mice. Findings so far point to the fact that it may be a safer pain reliever without risk of addiction or drug abuse. The natural peptides are called mambalgins and showed no toxic effects on the mice.

Morphine is the drug of choice used for severe pain, but it does have side effects and can be habit-forming.

Investigation continues to determine if the venom will work safely and effectively on humans.

Until recently, the Australian outback was uninhabited by primates or other mammalian predators, making it a perfect habitat for reptiles. Lizards were especially adaptable to the hot, hostile environment and thrived in the outback. Australia has many reptiles which are dangerous to humans, including the world’s largest reptile, the Saltwater Crocodile. Australia has a large […]

Since turtles aren’t the most common of pets, many people hold mistaken beliefs regarding them. Here are some of the common myths and the true facts: Myth: Turtles are an easy to care for pet. Fact: All reptiles are challenging pets and require knowledge of their specific dietary requirements and habits. Myth: Turtles are a […]