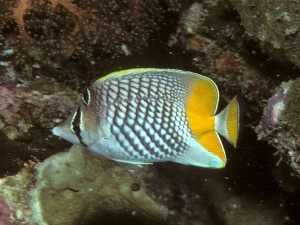 The Pacific Pearlscale Butterflyfish, found in Indonesia and the Philippines, is named for its pearly iridescent scales.

Males and females are 5.5 in. long. Introducing this fish before Surgeons, Wrasses, Tangs and Dwarf Angelfish usually avoids problems. Minimum tank size is 66 gal. This fish is a carnivore and will not eat flake foods. It should be fed meaty foods, such as Mysis Shrimp, Cyclop-eeze and live Brine Shrimp, and foods containing algae. If your fish refuses to eat when first placed inthe aquarium, try soaking the food in garlic and placing it in the skeleton of a coral. The Pearlscale Butterflyfish is not reef safe.

The Pink Skunk Anemonefish, or Pink Skunk Clownfish, is a fairly easy fish to keep. Being a hardy fish, it is ideal for beginners. It is bred in captivity and therefore readily available and inexpensive. It is native to the Eastern Indian Ocean to the Western Pacific Ocean. The males are 2.75 in., while the […]