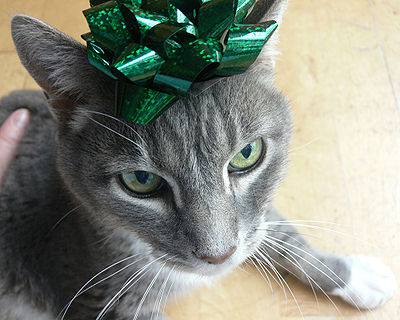 How to choose a name for your pet

Some people would say that you (the owner) are not the one choosing the name for your pet. The pet is telling you what his/her name actually is.

Owners choose pet names from all sorts of resources, for all different reasons. A pet may be named after a friend/family member, may be given a “human name”, may be given a completely random name – or when all else fails, you could always name your dalmatian dog “Spot”.

For dogs, I’ve met a lot of dogs named Buster. Ironically enough, my family (Canders7) had a beagle named Buster. Only later did I find out how common that name is for a dog!

Also, this is another resource for pet names with a slightly different list: http://www.babynames.com/Names/Pets/

A slightly more unique list of pet names (with options based on breed/type of animal) is found here: http://www.petnamesworld.com/ My only criticism is the lack of creativity, when looking for “rat names” all of the names given as options are derived from the very species they are!

Petfinder has a list of dog and cat names in 2008. It also has a list of unusual names (including “Joe the Plumber”) and unusual group names (such as Ebay, Google, Yahoo and Spam).

Choosing a pet’s name is a very personal decision. Sometimes you have a favorite name in mind before you even have the pet.

It can be a daunting task, but it’s helpful to keep in mind the type of pet, breed, what it look like, its personality and its age.

It’s also important to choose a name that your pet can easily respond to, one with one or two syllables.

Choose a name that doesn’t sound like any of the commands you give your pet. It can be confusing for them.

Something else to remember about names – your pet won’t be embarrassed by its name, but will you?

And don’t hesitate to rename an adopted pet. Your new pet will learn its new name very quickly.

I decided to give my German Shepherd a name that no one else had thought of. I had been reading about famous Native Americans and one chief stood out. His name was Quanah Parker. He was the last of the great Comanche chiefs. His mother was taken by Comanches at about the age of 11 and she eventually adopted their ways and married a Comanche chief, the father of Quanah. My Quanah lives up to her name as a leader and protector. And of course, she is my special friend.

When we got our two rescue dogs from the shelter, they were named Dana and Chloe. We didn’t like the name Chloe for a dog and anyway, I have a neice with that name. We are big fans of the X-Files TV series and love agent Dana Scully. So we kept Dana’s name and called ‘Chloe’ Scully. My friends always laughed when I would be calling the dogs down at the beach, as I would yell out ‘Dana Scully’ like the series character. Sometimes I would call them Agents Dana and Scully!! Sadly we lost our girl Dana, to cancer on 31st May 2009. We got Scully a friend from a shelter not long afterwards and as she had just come in as a stray that day, she didn’t yet have a name. Chris, my partner immediately called her Ivy, after the American grunge group, The Cramps, girl guitarist, Poison Ivy. My previous dog, who we lost to old age in 1999, was called Iggy Pop, (sometimes he was Iggy Pup) after the rock and roll singer, Iggy Pop. He had a song called ‘I Wanna Be Your Dog’, so it was a fitting name. Our cat came from a shelter too, and he already had the name Diesel,and as this is the name of a popular Australian rock singer, we left it as Diesel. So I guess we choose names that are from famous (or infamous) people!

Depending on the age of the pet when you get it, changing its name may or may not be a very hard task to undertake. Depending on the intellectual capability of the animal as well, they may have been trained to respond to their original name and may not learn quickly their new name. Be forewarned, some old dogs do not like to learn new tricks – especially when it comes to recognizing and responding to their new name!

Once upon a time, yours truly (Canders7) was introduced to a new dog that would become part of our family. He was an already pretty old beagle (a year or two old) so he was firmly attached to his old name. Training him to come to his new name (Buster) wasn’t impossible – but it was difficult. Eventually he did learn the new name though, and all was well. Even in the last years of his life – he still would actually semi-respond to his original “first” name, but was more enthusiastic in responding to his new name.

Education is crucial for teaching children respect for pets, wildlife and the environment. Teachers can teach lessons about subjects such as animal welfare, conservation and responsible pet ownership. Interactive activities, videos and stories can be powerful tools to get the message across. Teachers can also teach respect for animals indirectly, by including images and facts […]

The social media trend has extended to websites that offer the option of adopting and caring for a virtual pet. You can do this for fun or even as a way to consider whether you are ready to take on the responsibility of a real-life pet. Some sites offering adoption of virtual pets are geared […]

Does Your Pet Sleep With You?

If your cat or dog sleeps with you, you’re in good company. The majority of pet owners allow their pets to share their beds. About 56% of dog owners say they sleep with their dogs in their beds, while 62% of cat owners say they do. The practice is more common amongst women, with 25% […]