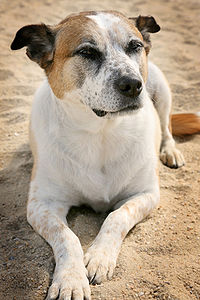 I had just finished reading a book called Animals and the Afterlife and there were lots of animal communicator stories in there, so I decided to research them as I was interested in connecting with my dog Dana, who had died of cancer suddenly on 31st May 2009, to make sure she is okay and also to see if Scully, her shelter sister whom came to live with us the same time as Dana did, 13th Dec 2001, and Ivy, our new shelter rescue, are happy too.

She came over on Dec 3rd 2009 and she was a very down to earth ‘horsey’ type woman, in denim jeans and boots, very straightforward and direct. When she came in she said Ivy was giving her a message about a tabby cat. Diesel, our tabby cat, was asleep out the back under the lavender, so there’s no way she could have seen him. She said Diesel was bailing up a minor bird. I looked out and he wasn’t, but half an hour after she left, I heard squawking outside and Diesel had a minor bird trapped in his cat run!! I opened the door and let him out of course!!

The communicator told me things that Dana relayed to her that nobody could possibly know. We had this place we used to go that I called our special place. It was just a stream with tall trees and occasionally a couple of ducks, that we would stop at on our way back from shopping and Dana and Scully would get out of the car and have a roll in the grass, and Dana would have a little swim. They just loved it. Well, I haven’t been able to go there since she died and I didn’t want to take Ivy there. It felt wrong. Anyway, Caroline told me that Dana was telling her about this place, she described it exactly. I nearly fainted, I was so overcome, I bawled my eyes out. She also said that Dana is happy and that she was glad to go to the Bridge, as she hadn’t felt great for about the past 3 years. Dana had quite a few ailments over the past 3 years, so this was true. 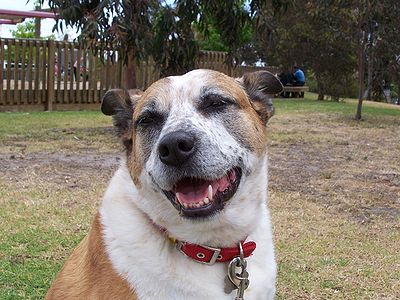 Caroline said Dana wasn’t as old as we thought, and was only about 10ish when she died, which is what I’ve always thought. The shelter guessed she was 4 when we got her. She told me that Dana has been back a few times and up on my bed a couple of times. A while ago, Ivy would not get on the bed to go to sleep one night, she slept on the floor, which is really unusual for her. There was nothing I could do to entice her up. And Scully would not come and sleep close to me when I was asking her to move up to the top of the bed, she glared at me like ‘Can’t you see that spot is already taken?!’. So I guess Dana was on the bed that night.

She said that Scully and Ivy really like each other, and that Dana is fine with Ivy being here as she knows we had to get a friend for Scully. Caroline said Ivy is very happy now, as at first she didn’t know if she was going to definitely come here. (When she was in the shelter, she hadn’t spent the legal amount of days there, so we couldn’t take her right away and we had to wait for 8 days to see if she was claimed). When she asked me how old Scully was I said 9 and she said don’t you mean 9 1/2? I said well, yes actually, Scully had told her!! And it’s true, as she was 18 months when we got her, but we just made their birthdays on the same day, Nov 19th, as that’s when my sister’s dog’s is, so we always said she was 6 months younger than she really was.

She said Scully is in pain with her back, due to the fact that she broke some discs in her back 2 years ago and has had a headache for about 3 months. She did craniosacral therapy on her for about 30 mins and Scully was like another dog!! It was amazing, Scully ran outside and took the kong from Ivy and laid there trying to get the biscuit out of it. Scully never does things like that!! Caroline said she just felt good and had a release from the headache. Then Scully flaked out like she was really relaxed. We had to change their diet to raw, as everything we give them is cooked and she said that is really bad for them. 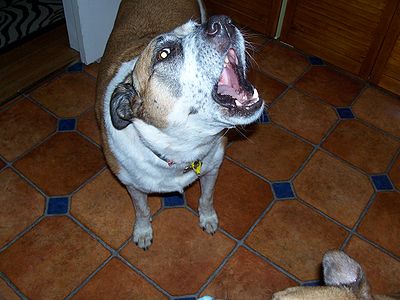 Caroline told me that Ivy said she wanted to go for walks on her own, which is something that I had actually picked up on before, as our walks are quite slow for Scully’s sake, as she now has just been diagnosed with hip dysplasia. Ivy gets to chase a ball, but we have to keep stopping to let Scully catch up. So I tried it for a few days, but then realised that they are really quite happy walking together and who cares if we have to wait for Scully? I don’t. But sometimes I do the two walks, slow with Scully and then take Ivy back to the beach for a big, fast walk. She also said it’s good to do things separately with them as they learn to be without each other and don’t get so stressed when they are apart, say if one has to go to hospital, or even when one of them dies before the other. They can cope much better with the loss. Dana and Scully were inseparable and when Dana was in hospital having her TPLO, Scully just lay on the bed and shook. And Scully and Ivy have started to become like that too. But we like to all do things together, so I kind of ignored that too! We are a family and we like to be together. However, I do take them to the vet seperately, so there are no distractions.

I’m glad I had the communicator come over, as it really did give me peace of mind that Angel Dana is happy and so are my two earth babies.