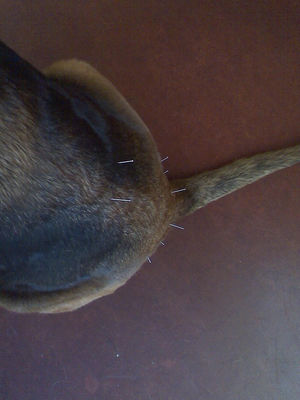 Some musculoskeletal disorders are genetic, some occur through injury, while others usually appear in older pets. You will find more in-depth descriptions of these disorders in the index.

Hip Dysplasia is the malformation of the hip joint. It occurs mainly in large breed dogs and is usually genetic.

Arthritis is inflammation of the joints. It can occur in all animals, either with the aging process or injury.

Osteosarcoma is malignant cancer of the bone. Golden Retrievers have a higher incidence of OSA as do other large breed dogs. It can occur in smaller breeds as well.

Legg-Perthes (also known as Legg Calve Perthes) is the spontaneous degeneration, lysis (breaking down of cells), and necrosis of the head and neck of the femur (thigh bone) from lack of blood supply to the bone. It leads to collapse and destruction of the hip joint and osteoarthritis. It is most often seen in small breed dogs.

Osteochondrodysplasia (dwarfism) can be hormonal, genetic or environmental. It can be caused by selective breeding or deficiency of a growth hormone in both cats and dogs. The short legs associated with a type of dwarfism can lead to joint problems.

Panosteitis affects large breed puppies between 5 and 12 months old. Symptoms are intermittent lameness. X-rays can reveal increased density in the long bone of the leg. Symptoms usually disappear by the age of 20 months.

Patellar Luxation – The patella (kneecap) is held in place by ligaments and slides into a groove (trochlea) on the femur. If the groove is too shallow, the patella slips out when the knee bends. It is usually inherited and can become painful in time.

Osteoporosis – The density and bone mass become more porous. Bones become brittle and greater risk of fracture exists. It can result in the compression of vital organs such as lungs, causing difficulty breathing. This can affect horses, dogs, cats, etc.

Eosinophilic Myositis affects the muscles in the head causing pain and later, the wasting away of muscles.

Myositis is muscle inflammation. It can be inherited or the result of a bacterial infection.

Muscular Dystrophy is the progressive degeneration of skeletal muscles.

Open Fontanel is the incomplete closure of the bones of the skull. It results in a soft spot on top of the head.

Elbow Dysplasia is the improper development of the elbow joint and usually leads to arthritis.

Wobblers Syndrome is the malformation and stenosis (narrowing) of the neck vertebrae. It is possibly inherited and affects large breed dogs and horses. Symptoms are rear leg weakness, appearing clumsy, dragging toes. It can eventually affect the front legs and can cause paralysis.

What to Expect at Your Pet’s Checkup

It is vital to your pet’s health to have annual or bi-annual checkups at your veterinarian’s office. Most vets begin their checkups with the pet’s nose, checking for any signs of a discharge or infection. Next your vet will check your pet’s eyes. This can be especially important with older pets in detecting cataracts. If […]