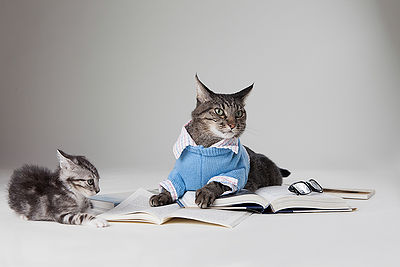 This should be of interest to all cat lovers.

Cats can learn by observing the actions of others including those of humans. Kittens watch their mothers and learn cat behaviors. In scientific observations, the intelligence of domestic cats is believed to be dependent on the richness of their environment.

Some older cats can develop Feline Cognitive Dysfunction Syndrome which is similar to Alzheimer’s Disease and having similar symptoms as in humans. If your cat prowls at night, is suddenly vocal, seems disoriented or anti-social, it’s time for a vet check.

Your cat is smarter than your iPad and stores thousands more data. The cat can process the data much, much faster than the iPad.

But cat lovers, don’t get too excited. Dogs are very smart too. Just think of all the jobs they are capable of handling and thinking through. Of course cats seem to do things to please themselves while dogs will do anything to please their human. But I love them both!

If you’ve ever been licked by a cat, you’ve experienced the roughness of the tongue, almost like sandpaper. A cat’s tongue is covered with barbs called papillae that face backwards and cause the rough sensation. The barbs are made of seratin, a substance found in human fingernails. The barbs serve a number of purposes. Cats […]