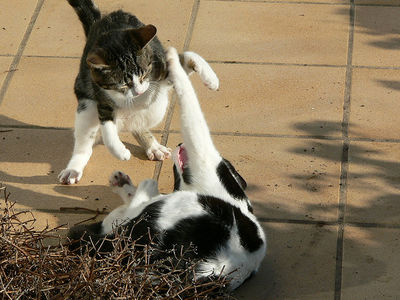 A cat’s survival instinct is very strong and they learn to defend themselves at a very early age. A mother cat will teach her kittens how to stalk and/or chase prey and then pounce.

Littermates begin their training by play fighting with one another. Cats in the same household can show aggression towards a feline friend living with them.

Cats vying for the Alpha position may fight. The dominant cat may choose to fight to retain his/her place. Even spayed and neutered cats can assume sexual positions to prove dominance.

Cats may want to protect what they perceive as their territory. Sometimes a cat will direct his/her aggression towards a friend when stressed or frustrated by something such as a strange cat outdoors or a bird that can’t be reached which leads to redirected aggression. Some cats spray or urinate in an area to claim it.

There may be a buildup of tension between the cats over jealousy or boredom.

Before attempting to define the problem, take the cats for a checkup at the vet to make sure that a medical problem is not the cause.

While play fighting is normal for kittens and cats, there are times when it’s necessary to intercede and stop the “fun.” There are things you can do to prevent the cats from hurting each other. Never, ever separate them using your hands – you’ll wind up badly wounded.

Keep a spray bottle of water handy and use it if only in dire circumstances if necessary.

A loud “NO” sometimes works.

Try clapping your hands or banging pots together. Loud noises can startle the cats and end the fight.

Throw an object such as a pillow between them.

Try Rescue Remedy to calm them. You can help prevent serious injury to the cats by keeping their nails clipped.

Keep each cat’s equipment separate from the other. This includes water and food bowls, litter boxes, beds, scratching posts, beds. Provide separate high perches for each cat. This will allow the shy or timid cat a safe place for escape. Place all these objects far enough away from each other to give them their own territories.

Try giving them treats at the same time. Give each cat the same amount of love and attention. Use pheromones like Feliway to diffuse tension and aggression.

You may have to separate them for a day or two and reintroduce them gradually. Keep the cats separated when you are not home to watch them.

If you nip the problem in the bud and don’t allow the situation to escalate, chances are good that it will be resolved. But if all fails, seek the expert advice of an animal behaviorist. If your budget is tight, there are books to help such as Keeping Peace When You Have More Than One Cat by Pam Johnson-Bennett, animal behaviorist.

All About Cats’ Paws

Cats (and dogs too)use every part of their bodies to communicate with us and each other, including their paws. Cats have sweat glands between their paw pads. When they scratch an object, they deposit pheromones from the scent glands, leaving lots of information about themselves that other cats can read. The sweat glands also prevent […]

Cats play differently with people than dogs do. Cats respond well to calm, easy going playtime. The exuberance of young children, while enjoyed and shared by dogs, is not welcomed by cats. If a cat is part of your family and you have a child or children, it’s important to teach them how to interact […]