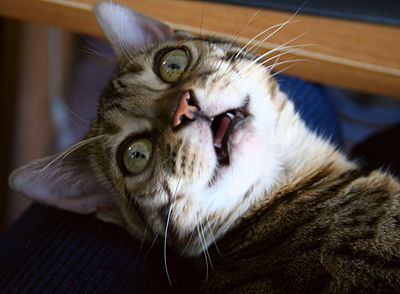 Cats can produce a number of vocalizations,about 100 different sounds, most of which tell us what’s on their minds. The majority of the vocalizations are meant to communicate with humans. The most common sounds are meow, purr, growl and hiss. By comparison, dogs make about 10 different sounds.

Siamese and other oriental cat breeds are known for their ability to “talk”, thus communicating with language.

As the ASPCA tells us, because cats hunt independently, they have limited need for vocal communication.

Cats communicate with their kittens, sexual partners and potential and real enemies. They use more vocalizations along with body language in order to make their humans understand their needs.

Purring, while the most common cat sound, is the one least understood. Cats purr when they are being petted or are just generally content. Kittens purr while nursing. But cats also purr when they are in pain or dying which is why the reasons for purring eludes us.

The cat’s meow is meant to communicate to their humans feelings such as that they want food or attention or “clean my litter box.” Many humans can be so attuned to their cats that they can tell the difference between meows and know just what their cats want.

When a cat is threatening or on the defensive or surprised, s/he will hiss and/or growl.

Tom cats fighting over a female or territory will snarl.

If a cat is in pain or fearful, a high-pitched shriek is heard.

Aggressiveness or danger brings on a low-pitched growl.

When kittens are left alone by their mother even for a short time, they will cry out loudly to alert her of their distress.

A cat will make what’s called a chirping sound when prey is sighted.

A frustrated cat who can’t reach the prey sometimes “chatters.”

A cat that is ready to mate will make a high-pitched wail known as caterwauling.

How many of your cat’s vocalization can you identify?

If you’ve ever been licked by a cat, you’ve experienced the roughness of the tongue, almost like sandpaper. A cat’s tongue is covered with barbs called papillae that face backwards and cause the rough sensation. The barbs are made of seratin, a substance found in human fingernails. The barbs serve a number of purposes. Cats […]

You’ll often see photos of cats with pet birds sitting nearby or pet mice cuddling up to them. Obviously these cats have never learned the art of hunting or are just very mellow. Some cats seem to be natural hunters. But others must be taught. Barn cats are generally good hunters. Most of the time […]