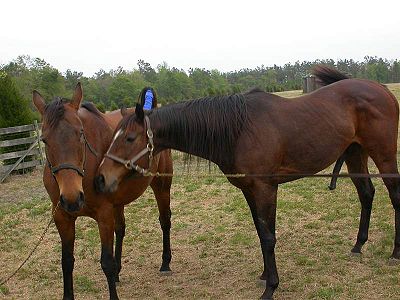 The Bedouin of the Middle East are the earliest known horse breeders. They created the Arabian Horse, which was a fast breed. The Akhal-Teke of West-Central Asia was bred for war and racing in ancient times. Medieval Europeons bred large horses specifically for war, called destriers. These large horses provided more power for the knight’s lance and could carry heavy armor. Medieval Muslims bred lighter war horses, designed to outmaneuver the enemy.

Once gunpowder was invented, war horses in Europe were bred to be light cavalry horses, used for “shoot and run” tactics instead of hand-to-hand combat. In the 17th century, Thoroughbred horses were developed to compete in races. Warmblood horses were developed in the 17th and 18th centuries as carriage horses. These horses were versatile and since the early 20th century have been used for sports. In 18th century United States, the American Quarter Horse was bred for work on ranches.

The need for horses for heavy draft and carriage work lessened with the invention of cars and trucks. These types of horse are still used in pulling and plowing competitions, but lighter breeds developed for sports are more popular today.

Beyond the appearance and conformation of a specific type of horse, breeders aspire to improve physical performance abilities. This concept, known as matching “form to function,” has led to the development of not only different breeds, but also families or bloodlines within breeds that are specialists for excelling at specific tasks. While all the bloodlines in a certain breed may be used for sports, different bloodlines will specialize in different events.

Horse breeding is complex and requires knowledge of the basics of estrus, the actual breeding day or days, pregnancy and gestation,the particulars of producing an ideal foal by choosing the right pair of breeding animals, etc. If you are considering breeding your horse, take into account that this is a job for experts. You will have to invest considerable time and money into the breeding process. Making a profit from horse breeding is difficult in the best of times, and market conditions can make it even more difficult.

Many “backyard breeders” forget to plan for caring for and training the foal, and many horses end up sold for auction and sent for slaughter. Organizations such as the Humane Society of the United States argue that current practices are contributing to numerous weaknesses and defects, as well as overbreeding.

Are You a Good Pet Neighbor?

As pet lovers, we know the joy of sharing our lives with these wonderful creatures. Most people enjoy the company of pets as long as they are well-behaved. You can ensure that your pets are good neighbors by following a few simple suggestions. A dog’s constant barking can grate on one’s nerves. Train your dog […]

Before getting started on grooming your horse, you need to have the proper tools – a curry comb or mitt, a moderately stiff body brush, a mane and tail comb, preferably metal, a soft bristle finishing brush, a hoof pick and a clean soft cloth or sponge. You may also want to add scissors or […]