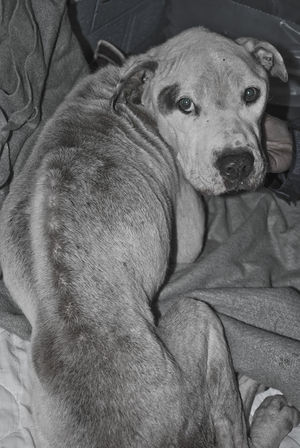 Dogfighting is a barbaric blood “sport” which forces dogs to fight one another. Children exposed to this grow up believing that this so-called “sport” that teaches violence, is acceptable and normal.

Dogfighting has a long history, dating back to Roman times when animals were pitted against one another for the entertainment of the masses.

The majority of dogs used today for fighting are Pitbulls and Pitbull mixes. But other breeds are used for fighting as well – the Bull Terrier, the Bulldog, the Presa Canario and the Bull Mastiff among them.

Pitbulls are the chosen fighters because in spite of their usual gentle, loyal nature, they can withstand much abuse and neglect and are not owner-aggressive. This is not necessarily true of larger dogs used for fighting who can turn their aggression towards humans.

Warning: The following descriptions of some of the training methods used may contain extremely upsetting explanations.

Vitamins and supplements are given to the dogs to build strength and stamina.

Hormones, steroids and cocaine are administered to encourage the dogs to fight.

Dogs exercise on treadmills to increase endurance and cardio function.

Catmill/Jenny: This is a device similar to a horse walker with several beams. A dog is chained to one beam while a small animal such as a cat, rabbit or small dog is hung from another beam. The dog chases the bait, running in circles. When the exercise is completed, the dog is offered the bait as a reward.

Springpole/Jumppole: A rope, tire or animal hide is hung from the pole with a spring action encouraging the dog to jump up and hang on to the bait in order to strengthen jaw muscles and back legs. Tree limbs are sometimes used as well as cages with live bait hung from the poles.

Flirtpole: A pole held in the hand with a lure attached which the dogs chase.

Dogs necks are wrapped around with heavy chains to build strength in the upper body parts and neck. Weights are sometimes attached to the chains and dogs are usually permanently chained this way.

Bait animals are tied up while the dogs are allowed to rip them to pieces.

When dogs appear ready, they fight against more experienced dogs. If they survive and pass this test, they are considered ready to fight.

Dogs that don’t meet the criteria or are badly injured in fights are either inhumanely killed or abandoned.

Dog fights take place in many different settings – barns, abandoned buildings, basements, garages, warehouses. Equipment is easily set up or dismantled or left in case of a hurried exit.

This disgraceful, horrific violence continues throughout the world.

While dogfighting is against the law in all 50 United States, it continues clandestinely.

Please write or call your Congressional members and encourage them to impose stiffer penalties against these inhuman humans and onlookers who force dogs to take part in dogfighting.

Contraceptives for Wild Horses and Burros

In our article, Feral Horse and Burro Roundups, we mention research and experimentation with contraception in wild horses and burros. The EPA, Environmental Protection Agency, as of February, 2013, has approved the use of the immunocontraceptive vaccine, GonaCon for use. The vaccine was developed by scientists working with the U.S. Department of Agriculture Wildlife Services’ […]