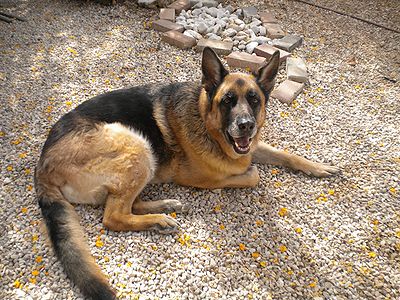 Glucosamine/Chondroitin is widely becoming the supplement of choice as an aid to easing joint problems, particularly arthritis, in dogs.

Dr. T.J. Dunn, writing for PetMD, says that although glucosamine/chondroitin won’t change abnormalities in bone structure, it does decrease inflammation and improves the body’s ability to repair and strengthen tissues.

I acquired Quanah, a German Shepherd Dog, from a breeder when she was 10 weeks old. She was the only one of several pups who immediately ran up to me as if to say, “choose me” and so I did.

Quanah was also the largest pup of the litter and soon outgrew my 2 other dogs, a terrier and a rottweiler mix. She is now 10 years old and stands 29 inches at the shoulder and weighs in at about 110 lbs., large for a female. The breeder assured me that there was no hip dysplasia in her ancestry. Little did I know that her joint structure would cause problems.

As she grew and grew and grew, one of her ears refused to stand up. I tried all sorts of painless remedies to encourage the ear to stand, but nothing worked. I wasn’t about to put my dear pal through corrective surgery for unnecessary cosmetic purposes.

Shortly after she reached her full growth, Quanah began having bouts of left front leg limping. X-rays revealed elbow dysplasia. I knew I didn’t want to keep her on NSAIDs indefinitely for the pain due to their side effects. I then started researching alternative treatments.

I liked what I read about glucosamine/chondroitin – no side effects, strengthens cartilage and relieves inflammation. I purchased a bottle of the tablets and waited patiently to see results, giving her 1000mg. daily.

Three weeks later, the floppy ear began to stand up. I was amazed and since the only change I had made was administering glucosamine/chondroitin, I must attribute the strengthened ear cartilage to the supplement. The elbow dysplasia resolved itself, the limping stopped completely and she didn’t need any pain medication for the elbow.

Quanah has had her share of medical problems in her 10 years – hip dysplasia resulted in hip replacement surgery, stomach torsion surgery, erhlichiosis treatment, splenectomy, IBD problems since resolved – to name a few.

I attribute her present good health to the changes I made for her and the other dogs. They are vaccinated only for rabies as the law requires. Titer blood tests let me know the antibody situation for other diseases. The dogs are fed grain-free kibble with one protein source. I add cooked food to the kibble but am leaning towards a raw diet. The dogs receive daily supplements of glucosamine/chondroitin, Omega 3, a product called Spirugreen that contains all sorts of goodies for pets (Dr. Mercola and Dr. Becker online) and probiotics.

While Quanah still has some issues such as rising from a prone position, for which I’m considering acupuncture, I see her with more energy and higher spirits then she’s displayed in a long time.

So I say to all the nay-sayers, (several veterinarians) the proof is in the dog who at 10 years old is as playful as a pup.

How can I help my senior dog?

We can all agree that our pets are too soon taken from us whether by old age, illness or accident. If we are fortunate, we see them attain their normal life span. However the aging process begins earlier than we would like. We see the signs gradually – their movements are slower, their eyesight dims […]

Dogs normally pant, especially when they are excited, after exercise, during hot weather. Panting helps a dog cool down. But if there is a change in your dog’s normal panting – it becomes heavy or prolonged – it could be an indication of something serious. Obesity can play a role in a dog’s heavy panting. […]