The European magpie, also known as Pica pica, belongs to the crow family, and is widespread throughout Europe and Asia. Magpies are easily recognizable by their distinct glossy black plumage, white belly and shoulders, and its long black tail that could reach half of its total body length.

Experts believe this bird to be one of the smartest of all animals, with a brain-to-body mass ratio similar to most great apes.

Magpies, as well as their crow relatives, have been seen making tools for gathering food. They have also been observed engaging in complex social behavior and rituals. They are known to form powerful allegiances among themselves and can work collectively and strategically to fend off (and even occasionally attack) predators. Their cognition seems to improve when they live in groups, and adult magpies can teach their young ones what they themselves have learned in their lifetime. Similarly to elephants, magpies have been observed holding funeral-type gatherings. In one instance they even deposited grass on the corpse of one of their own. Magpies are also the only non-mammal species to have passed the mirror self-recognition test. (i.e. they have self-awareness that allowing them to recognize themselves in the mirror.) 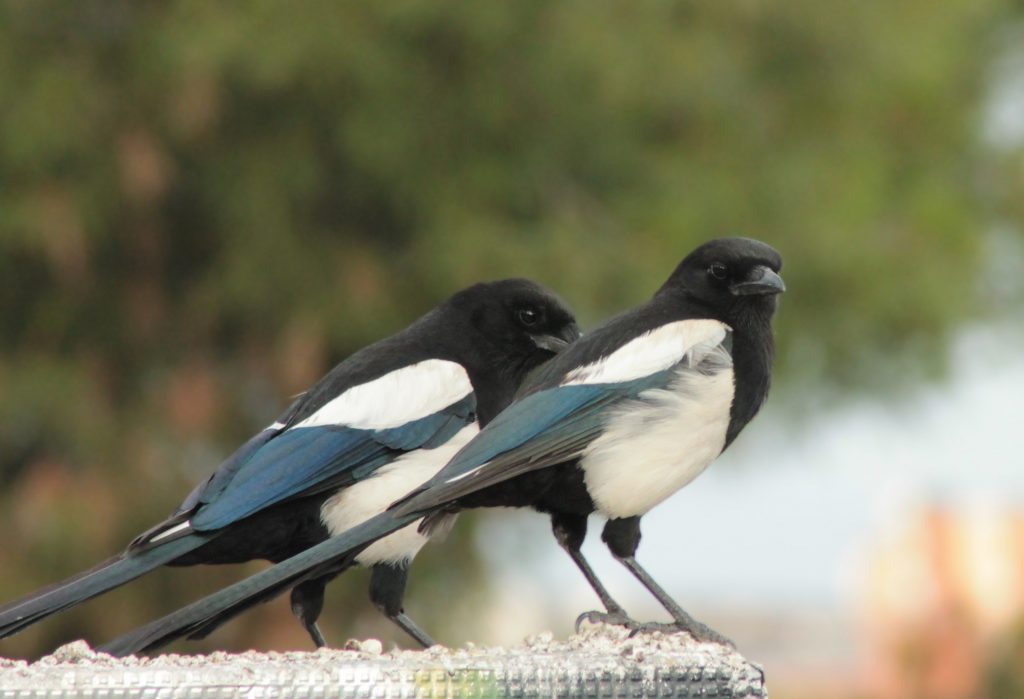 Like crows and ravens, magpies can emulate human speech as well as mimic the call of other birds. 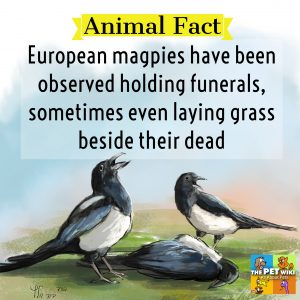 This bird also loves to steal and hoard shiny objects, such as jewelry, to collect in its nest.

The magpie is omnivorous, eating young birds and eggs, small mammals, insects, scraps and carrion, acorns, grain, and other vegetable substances. They mate for life and can live up to 21 years.

Even in the wild, magpies are quite comfortable around human habitation. Some people keep them as pets, either by rescuing injured chicks, or by purchasing them from breeders. Despite this, it is important to remember that these are wild independent animals. In the US you need a special permit to care for wild animals.

In short, this bird is one of the most intelligent, curious, empathetic and socially active of all animal species, and can develop friendships with people. Magpies have long memories, and whether you keep one as a pet, or interact with one in the wild, how you treat it will largely affect how it responds to you.

Video of european magpie interacting with a mirror:

Once you’ve decided to adopt a bird, size should be considered. While all birds require commitment and care, larger birds have more needs than their smaller cousins. Many large birds in the parrot family have long lifespans which means many years of care. Purchasing small birds is less expensive while large ones can be costly. […]