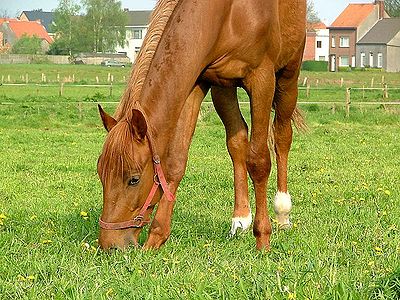 Botulism is produced by Clostridum botulinum and is among the most lethal toxins known. There are 7 known strains of botulism (A-G), A and B being the most common in horses. Type C is caused by decaying animals in feed. Some types cause the disease in birds and cattle as well as horses . Some live in the intestinal tract of certain animals. The toxins are odorless, colorless and thought to be tasteless.

Botulism spores can be found in less expensive forage where quality of these large, round bales of hay is questionable. Due to the state of the economy, hay prices have risen causing some owners to purchase what they are led to believe are cost effective bales of hay. But there has been an increase of equine botulism due to these choices.

Horses contract botulism by ingestion, foals, due to their immature digestive tracts, have no defense against the bacteria and wound contamination.

Symptoms include muscle weakness or paralysis, difficulty swallowing, slow pupil response to light, respiratory distress and so on.

Botulism is often confused with colic. A test for botulism which takes 2-3 weeks for results involves taking a sample from the horse and exposing it to a mouse. If the mouse dies it’s confirmation of illness. However the test is not always accurate and takes far too long.

Another test is gently pulling the horse’s tongue out of it’s mouth, holding the jaws shut. The amount of time it takes for the horse to pull the tongue in can indicate disease. Sometimes the tongue just hangs out of the mouth.

With the grain test, a horse is fed a small amount of grain and depending on how much time it takes for the horse to eat it can also be an indication of botulism.

The only vaccine available is for Type B botulism which is given at the first signs of the disease. Treatment includes administering antitoxins and supportive care such as nutrients, hydration, treating pressure sores and infections.

The horse that is down should lie on soft, padded bedding, be moved frequently, cleaned of urine and feces and have eyes protected. If infections develop, antibiotics should be administered.

If after the first 2 or 3 days there are signs of some improvement and the horse appears to be stabilized, a sling can be used to raise the horse to avoid further complications such as pneumonia, muscle inflammation, cystitis, cellulitis and so on.

Hopefully, continued research will result in improved diagnosis and treatment.

Feeding a Horse During Droughts

Drought conditions sometimes occur, but can be predicted. You can prepare your horse beforehand by helping him/her to adjust gradually. Before pastures dry and prices of hay rise, stock up on quality hay. Purchasing hay by the ton means you’re getting the right weight for the price you pay. If you buy bales, try to […]

Although there are many products available that claim to heal, there is no scientific proof that they do. But there is one product that can be effective. It has a long name: Silver Sodium Zirconium Phosphate Polyurethane Foam Wound Dressing. That’s a mouthful and it’s shortened to SPF Dressing. Researchers have found that while SPF […]

People have given descriptive names to many skin conditions a horse may have such as “girth itch.” But determining the disease requires a professional evaluation. Horses have sensitive skin and in order to find the cause of any skin condition, a veterinary examination is required. Early and proper treatment can ease a horse’s distress and […]