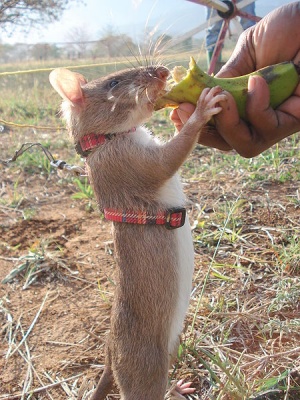 Emin’s and Gambian Pouched Rats are so similar that it’s difficult to tell them apart. They are originally from Africa where they lived in forests and wooded areas. They were once imported to the U.S. as pets, but importation is now illegal as a pouched rat was found to be a carrier of monkeypox. The Emins and Gambians now in the U.S. have been bred here and while it was once illegal to own them as pets, that ban has been lifted since 2008.

Emins are 2 1/2 feet long while Gambians measure 3 feet. Half of those lengths are tails which are tipped white. Emins weigh 1-4 lbs. and Gambians weigh 1-5 lbs. Their cheeks, which give them the pouched name, are similar to squirrels, hamsters, etc. in that they have pouches that can be filled with food or whatever the rat chooses. Coat color is agouti. Emins are a reddish brown with a white underside and large ears for their head size while gambians are a grey colour with a slightly lighter underside.

Pouched rats are tamer when they are handled from birth. Use caution and don’t surprise when approaching these large rats.They have very poor eyesight so rely on sound and smell. Their bite can cause a lot of damage,and if not tame they will not only bite but actively attack repeatedly biting and scratching.

They can be kept in same or mixed sex pairs or groups not just singly as once thought. With careful and slow introduction, pouched rats can get along with other rats.

Pouched rats are climbers and will climb on shelves, curtain rods, doors and anything that will hold them. It’s a good idea to provide them with a climbing post.

The cage should be large, at least 3 1/2 feet long. If the floor is wire, it should be covered so the rat’s feet don’t get caught. Aspen bedding or shredded newspaper is recommended as bedding. Include a house for the rat to hide in, toys and a towel or article of clothing to cuddle in. They love to chew, so wooden toys are a good choice, just be sure the wood is untreated and not pine or cedar as this is toxic to them. Water bottles need to be made of strong material or they will chew through them. You can include a hammock and a shelf in the cage. They can usually be quite easily litter trained.

A feeding dish isn’t a necessity. You can designate one area of the cage for food and put a handful of food there. Pouched rats need a diet of seed mixture and also fresh fruit and veg. They enjoy snacks of pasta, bread, cereal and insects.

Pouched rats have dandruff which in humans can cause sneezing and temporary skin irritation. You might want to wear a mask when cleaning the cage.

These rats can be difficult to train, but patience pays off. If your rat does something you are not pleased with, use a firm no. If this doesn’t work, try a spray water bottle. Consistency is very important.

Multimammate Mice are known by many names – Natal Multimammate Rat, Common African Rat, Soft-furred Rat. They are referred to as the link between mice and rats. The fur is long, soft and silky. The body is 15 cm., the tail is 11 cm. and weight is 60 gms. Lifespan is 2-3 years. This is […]

The domestic Rabbit originated with the European Rabbit. The Rabbit’s natural habitats are Europe, Africa and parts of Asia. There are more than 45 breeds of Rabbits. Different breeds have different personalities and characteristics. A female rabbit is known as a doe and a male rabbit is a buck. For show purposes, rabbits are divided […]

Spiny Mice – Egyptian and Arabian Spiny mice live an average of 3-5 years. They are 1 3/4-4 inches long. The tail is 1 1/2 times the body length. Colors are agouti, tan and cream. They have fox-like faces, large eyes and rounded ears. Hair along the spine is thicker and stiff which gives them […]