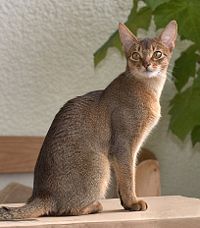 According to ancient Egyptian law, taking the life of a greyhound warranted the same punishment as killing a man. The Ibizan Hound is an ancient breed which originated in Spain but may have been used by the Pharaohs for hunting.

As early as 3500 B.C., Egyptians were domesticating wildcats from Africa. They considered cats to be demigods and the property of the divine Pharaoh. That ranked them above humans, making them the first to be saved if a house caught fire, before the people. Long-haired cats are pictured on the pyramid walls in Egypt in hieroglyphics.

The first recorded history of homing pigeons used as carriers comes from Egypt. The use of a “hand” to measure a horse’s height originated in Egypt around the year 3,000 BC. Other pets in Egypt include included monkeys, geese, goats, and birds. Some people saved their pet’s collar after it died and had it buried with them, in the hopes that the pet would be with its master in the afterlife.

In 1956, exiled Russian Princess Nathalie Troubetskoy brought an Egyptian Mau kitten to the U.S. from Egypt via Rome.

Today, Egypt is a Muslim country and while Islam mandates treating animals well, Muslims do not usually keep dogs which are considered unclean by their religion. In a 1996 CNN story, it was reported that poverty in Egypt prevents most people from owning pets of any sort and that the cats of present-day Cairo are mostly homeless and forage in garbage dumps for food.

When riots broke out in Egypt in early 2011, American citizens were evacuated and many had to leave their pets behind temporarily. Citizens were asked to make private arrangements for the transport of their furry friends.