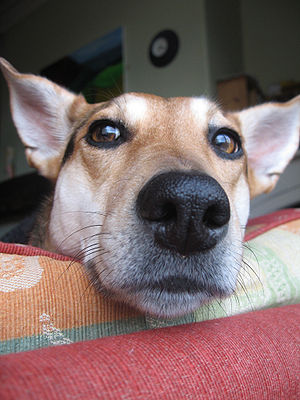 There is a legend that tells of dogs on Noah’s Ark who discovered a hole in the hull of the Ark. In order to save the Ark from sinking, one of the dogs stuck his nose in the hole and prevented the ship from flooding. Another dog alerted Noah to the problem who quickly repaired the hole. As a reward, God gave dogs cold, wet noses as their symbol of good health.

There are a number of reasons given why dogs have cold, wet noses, although that’s an interesting tale.

Dogs often lick their noses, especially after a meal when they use their tongues to clean the area. Licking brings moisture to their noses making them moist.

Some scientists believe that since dogs don’t sweat, having cold wet noses plays a part in cooling down their bodies.

Others explain that a dog’s cold, wet nose enhances the sense of smell.

When outdoors, dogs are constantly sniffing at their surroundings as a means of learning what’s happening there. They pick up moisture from the ground or grass making their noses moist.

But we should not rely entirely on the cold, wet nose as a sign of good health.

A moist nose would be more descriptive, as a wet, runny nose may indicate illness. Dry noses do not necessarily mean your dog is ill. Both dry and wet noses are not good indicators of good or ill health.

However if your dog’s nose is swollen, if there’s difficulty breathing, any discharges or foul odor, a veterinary checkup is in order at once.

Everything has a smell, sometimes pleasant or at least not offensive, other times, not so nice. Dogs (humans too) have what’s considered normal odors produced through sweat glands. But when the odor is objectionable, it’s time to look for the cause. There are a number of reasons why your dog is smelly. Bad breath can […]

Is Your Town Dog Friendly?

Is your town a dog-friendly town? Dog Fancy magazine recently held its 6th annual contest to find the 40 top dog-friendly places in the U.S.A. I’m sure you’re all salivating to find out if your town made the list. Here’s a sneak peak at a few cities at the top of the list: –Carmel, Calif. […]

The Journal of the American Veterinary Medical Association (AVMA) has reported on a study in their September 1, 2012 issue that found a single dose of carboplatin, a chemotherapy drug, given subcutaneously immediately after surgery has resulted in similar survival times and effects as traditional chemotherapy protocols for Osteosarcoma (OSA – bone cancer). With traditional […]