In studies at the University of Sussex in the United Kingdom, horses were able to recognize differences in human facial expressions.

Using photographs depicting positive and negative human facial expressions, the 28 horses used in the Sussex study showed changes in heart rate when they were shown the photos.

Increased heart rate indicated an understanding of angry human faces. When shown pleasant human expressions, there was little change in heart rate. The reaction has not been seen before between animals and humans. 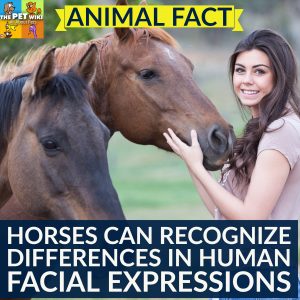 The horses also responded to the angry faces by looking at the photos with their left eye. The left eye receives information from the right hemisphere of the brain which processes threatening stimuli.

The horses’ stronger response to the negative photos than the positive ones may be due to the fact that they are prey animals. It is important for their survival to recognize threats. (Dogs also view negative human facial expressions with the left eye).

Dr. Karen McComb, co-leader of the research, explained the findings.

Horses are highly social and therefore have heightened emotional awareness.

Despite the differences in facial structure between horses and humans, horses are still able to accurately assess our moods.

It’s amazing that even though the horses were shown only positive and negative photos without any verbal commands, they were still able to understand our facial expressions.

The research is part of san ongoing project into emotional awareness in horses.

Running a horse in circles on a line is called longeing. A rope, 20 to 30 feet long is attached to the horse’s bridle or halter while the handler stands in the middle of a circle. The horse then goes round and round the handler as part of training. The horse learns the voice commands […]

Just like their human pals, horses have 5 senses – Hearing, Sight, Smell, Touch and Taste. Understanding how the horse uses these senses gives us a better idea of how to interact with them. Hearing – A horse’s sense of hearing is much sharper than ours. Because they can move their ears 180 degrees, a […]

Some studies have shown evidence that personality traits in horses can be inherited. Researchers in France and Switzerland investigated the Franches-Montagne horse, a light draft horse mixed with heavy drafts and Warmbloods. Their findings show that the more Warmblood genes a horse has, the more of those personality traits are present (and vica versa). The […]