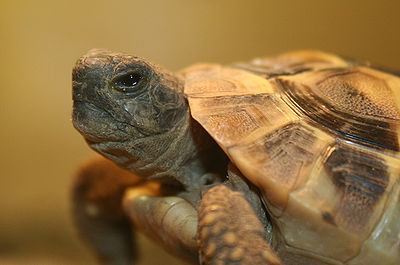 The Hermann’s Tortoise natural habitat is Mediterranean forests. But due to humans developing their space, there aren’t many to be found in the wild.

They are small tortoises and are herbivorous, eating vegetables and soft fruits. In the wild they may eat small insects, but it’s not necessary for their diet in captivity as long as a vitamin/mineral supplement is included.

A British doctor who found his pet Hermann’s Tortoise upside down in a bowl of water performed artificial respiration, saving the pet’s life. Dr. Ben Waterfall did 6 minutes of mouth to mouth resuscitation on Atlas,the family’s 8 year old pet tortoise. When Atlas began to revive, Dr. Waterfall continued with breathing into the tortoise’s nose.

Atlas was examined by a veterinarian, given antibiotics to prevent infection and pronounced well thanks to the efforts of Dr. Waterfall.

The lifespan of a tortoise is at least that of humans and some have been known to live more than 150 years.

Atlas is sure to have a good life, thanks to his owner’s quick thinking and action.

The Blue-Tongued Skink is found in Northern Australia, Irian Jaya and Southern New Guinea. It lives in forested areas where there is lots of ground cover for them to hide in and hunt in the leaves. They grow up to 2 feet long and live up to 20 years. This Skink is a docile creature, […]

The Red-eared Slider Turtle is a member of the Emydidae. The three subspecies include the Red-eared Slider, the yellow-bellied slider (Georgia, Carolinas, Virginia)and the Cumberland slider (Tennessee). The Red-eared Slider is native to the Mississippi from Louisiana north to South Michigan and west through Texas, Oklahoma and Kansas. This slider has a broad red stripe […]