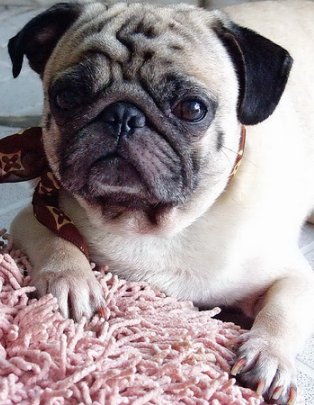 The Pug is a small breed of dog with a wrinkly, short muzzled face, and curled tail. Pug puppies are often called puglets. The breed has a fine, glossy coat that come in a variety of colors, and a compact square body with well-developed muscle. They have been described as multum in parvo (“much in little”), referring to the Pug’s personality and small size. Known in Ancient China as “Lo-Sze”, they may have been responsible for both the modern Pekingese and Cavalier King Charles Spaniel.

They have Chinese origins, but were popularized in Western Europe by the House of Orange of the Netherlands and the House of Stuart of England, Ireland and Scotland. They can suffer from a variety of health issues, including overheating, obesity, pharyngeal reflex and two fatal conditions which are granulomatous meningoencephalitis and hemivertebrae. In addition, care must be taken by their owner to clean the folds of skin on their face.

The well-being checklist that every dog owner should adhere to

This Guest post is written by Mandy Bular, he is a freelance writer. She has written a unique and very interesting article on various categories such as Pet, Lifestyle, Health and currently associated as a blogger with various industries.

How Children Benefit from the Family Pet

Owning a family pet can be great for kids. Below are some of the benefits as well as things to watch out for. Contents 1 Responsibility 2 Compassion 3 Companionship 4 Possible pitfalls Responsibility Owning a pet is one of the best ways to teach a child to become responsible. Besides the joy of having […]