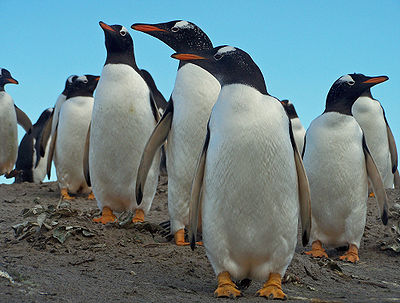 Penguin Awareness Day is January 20th, and we thought you would like to know a bit about these friendly animals.

There are 17 species of penguin and they fit into 3 categories – brush-tail, crested and king/Emperor. Penguins live in the southern hemisphere and some live near the equator. Large populations of penguins can be found in Antarctica, Australia, New Zealand, South Africa and the Galapagos Islands, with its temperate climate. The largest penguin is the Emperor which is about 3.7 feet tall and weighs 75 lbs. The smallest penguin is the Little Blue Penguin, standing 16 inches tall and weighing 2.2 lbs. Some species of prehistoric penguins grew to the size of humans.

Penguins are thought to be near-sighted on land but have excellent vision in the water which helps them avoid predators. They are flightless aquatic birds. Their flippers propel them through the water while their tail acts as a rudder. Though they can only remain underwater for 15-20 minutes at a time, they are capable of swimming more than 12 miles per hour and have been known to dive as deep as 275 feet. Krill, fish and squid make up the main menu of a penguin’s diet.

Penguins seem to have no fear of man and are actually friendly. The reason could be that they don’t face any land predators.

The black backs and flippers and white fronts make penguins look like they are wearing tuxedos. While very graceful in the water, they have a funny, waddling walk on land. Perhaps because of their special look and friendliness towards humans, they have achieved popularity in books and movies.

The Antarctic Treaty was signed by 12 nations in 1959 and reauthorized in 1991 to protect Antarctica and preserve its living resources. The treaty makes it illegal to harm, or in any way interfere with, a penguin or its eggs. All 17 species of penguins are protected and at least 3 are at risk. In 1997, Macquerie Island was designated as a World Heritage site and penguin reserve. The Kerguelen Islands off Antarctica are a French national park. Species which are endangered or threatened in the wild are being bred in captivity in sanctuaries and in theme parks and zoos.

The author of the following is unknown. But the sentiments expressed will touch your heart. Here in this house… I will never know the loneliness I hear in the barks of the other dogs “out there”. I can sleep soundly, assured that when I wake my world will not have changed. I will never know […]

Most of us have experienced the heartache of losing a pet, sometimes to old age, sometimes to to disease or accident. Those pets that have gone to the Rainbow Bridge will always be remembered. Now we have a special day set aside to honor those memories – World Pet Memorial Day. It takes place on […]