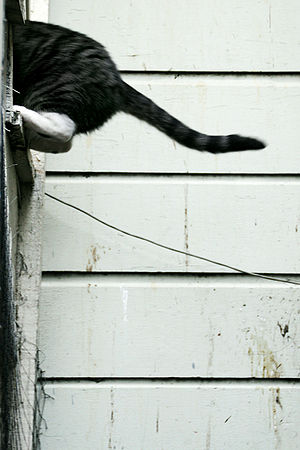 Because cats have such keen senses and often survive situations that other animals might not, they were thought to have many lives. The origin of the myth of nine lives however is a bit cloudy.

Brewers Dictionary of Phrase and Fable explains the myth of a cat’s nine lives because it’s hold on life is “more tenacious than many animals.”

In religion and folklore the number nine is said to be mystical. Nine is the “Trinity of Trinities”, a lucky number.

Many cat myths began in ancient Egypt where cats were worshiped as gods. The Egyptian sun god, Atum-Ra, was said to take the form of a cat for visits to the underworld. The gods Atum-Ra gave life to were known as the Ennead, meaning the Nine.

Cats continued to be worshiped in Europe until the Middle Ages. At this time, superstitions abounded and cats were thought to be evil and represent the devil, and many were slaughtered. One method of murder was to throw cats from high places. Many cats survived the ordeal to the amazement of spectators giving rise to the idea that cats had many lives.

In the play, “Romeo and Juliet”, Shakespeare made reference to the belief that a cat had nine lives.

There is an ancient proverb of unknown origin that says, “a cat has nine lives. For three he plays, for three he strays, and for the last three he stays.”

The number nine is considered lucky in China where the myth of a cat’s nine lives could have originated or been perpetuated.

Zora Neale Hurston was an African-American writer in the early 20th century who grew up in Eatonville, Florida, north of Orlando. Her stories were filled with southern black folklore, one of which told of why cats have nine lives:

A hungry cat entered a house and found a dish filled with nine fish and promptly ate them all. The fish were meant for nine starving children who died of hunger the following day. The cat died too from eating so many fish at once. The cat reached Heaven and God heard his story. God was so angry that He threw the cat out of Heaven and made him fall for nine days to earth. Because the cat is responsible for the nine children’s lives, as punishment, God decreed he must die nine different times before he remains dead.

Not everyone in the world believes cats have nine lives. In Arab and Turkish proverbs, cats have only seven lives.

Sorry to disappoint you, but cats only have one life, just like all animals.

And while cats do have the ability to twist their bodies so that when falling from heights, they land on their feet, please don’t test it.

Introducing a Dog to a home with a Cat

Introducing puppies to your cat is easier than with a grown dog, but it can be done. Cats are very territorial while dogs want to be wherever you are. It’s a good idea to bring home a dog that has had obedience training and socialization. Puppies should attend obedience classes. You can begin the process […]

How to Toilet Train Your Cat

Would you like to train your cat to use the toilet instead of a litter box? It’s doable and your cat may be one who can learn. However, you need lots of patience as training can take several weeks. Having an extra toilet is a big help as you can designate that one as the […]