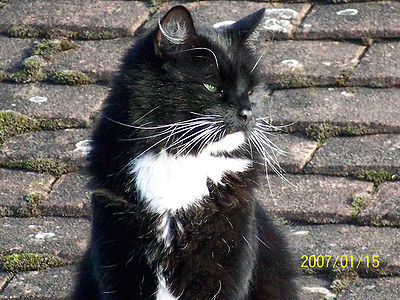 Animals have proven to be some of the best medicine for people with health problems, physical and psychological handicaps. There are many stories of dog heroes, but cats have also shown to be brave and and are able to perform life-saving feats voluntarily. These stories of cat heroes were found on the Purina pet food website “petcentric.”

Tee Cee, a cat in the United Kingdom was awarded the Hero Cat title in 2006. The Hero Cat award recognizes brave cats who help save the day.

Aware of a seizure about to happen to his owner, Tee Cee ran back and forth to his owner’s wife, warning of impending danger. Tee Cee did not leave his owner’s side until assistance arrived and he gained consciousness.

When an owner was attacked by 2 vicious dogs, her cat, Lima, came to the rescue. The owner’s husband heard his wife’s screams and ran out of the house trying to save her. He was unable to chase the dogs away. But Lima, usually timid, jumped into the fray and attacked the dogs leading them away. The owner’s husband was then able to get her back into the house. Happily, the owner recovered from her injuries and Lima returned home unharmed.

A wheelchair-bound owner decided to train his cat to dial 911 emergency, not knowing whether the cat would respond when really necessary. But when the owner fell from the chair and was unable to move, his cat Tommy came to the rescue, remembering his training and dialed 911 for assistance.

An owner in her garden was suddenly confronted by a poisonous snake. The snake was hissing and ready to strike her when the owner’s cat Sona stepped in and attacked the snake. Saving her owner, Sona was bitten on the paw but recovered 3 days later in the animal hospital.

A cat named Shadow meowed loudly until awakening her owner one night. The house had filled with carbon monoxide and Shadow wouldn’t give up until her owner awoke. The owner, her children and their dog were saved from certain disaster by Shadow’s persistence.

From the ASPCA: Cat of the Year honors went to Mittens. She was trapped in a milk crate and set on fire by two Baltimore teenage boys in 2009. Mittens managed to escape the crate and extinguish the fire. Although badly burned she refused to abandon her kittens and returned to nurse them. Her plight led to the pursuit of stricter animal cruelty laws in the State of Maryland.

There are many stories of cats aiding blind and deaf companions, both animal and human. Petcentric tells the story of Mary, an old pug, blind in both eyes.

Mary’s owners noticed that their rescued kitty, Mancat, was constantly at Mary’s side. They then realized that Mancat was guiding Mary around any obstacles and even standing guard at her food bowl, protecting Mary from the other dogs.

Cats are outstanding at therapy jobs. In 1990, Dr. Bill Thomas developed what he calls The Eden Alternative. He discovered that introducing cats into nursing home made a remarkable difference in the health of residents. Just proving what a difference animals make in our lives.

If you know any cat heroes (or other animal heroes), please tell us about them.

Do Pets Have Blood Types?

The battle of the sexes seems to have filtered down to our pets – in our minds, not theirs. Let’s explore if there are really differences between males and females and see how we humans view them. Cats – Many people feel male cats are more affectionate. Females tend to be moodier. Non-neutered males can […]

Why Dogs and Cats Sleep Curled Up

Have you ever watched your pet curl up on a winter’s day, feet tucked in, tail curled round covering the nose? While it may not look like the most comfortable position for your pet, it offers warmth and comfort. The curled position conserves body heat and while our dogs and cats usually have their own […]