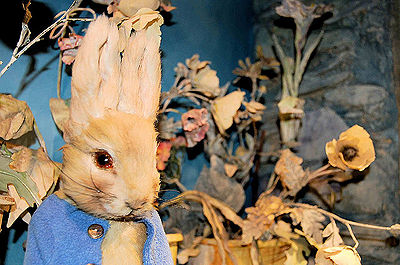 Beatrix Potter, most famous for her book The Tale of Peter Rabbit, was an author and illustrator of children’s books depicting animals, as well as a sheep breeder and conservationist.

Potter was born in London in 1866 and was educated at home by governesses. She had many pets including frogs, newts, ferrets, a pet bat and two rabbits – one named Benjamin and one named Peter.

When Potter was 27, in a letter dated September 4, 1893, she sent a picture and story letter about rabbits to Noel Moore, the five-year-old son of her last governess, Annie (Carter) Moore. Moore encouraged her to publish her story, so she expanded it and turned it into The Tale of Peter Rabbit. Potter wrote and illustrated 23 books for children, populated by animals who have human personalities but also are deeply based in natural actions.

With the royalties from her books, Beatrix Potter bought Hill Top Farm in village of Sawrey. She married local solicitor William Heelis and began to breed and show Herdwick sheep. She served as president of the Herdwick Sheep Breeders’ Association.

Potter’s concern with preservation of farmland led her to donate her land to the National Trust after her death. The legacy consisted of 4,000 acres (16 km²) of land, cottages, and 15 farms. The land is now part of the Lake District National Park.

In 2009, researchers conducted a study of where domestic cats originated. Their findings, based on DNA showed that domestication of cats began in the Fertile Crescent. The Fertile Crescent is part of the Middle East including Turkey to Northern Africa and eastward to Iraq and Iran. When humans decided to settle in one place and […]

The Iditarod Dog Sled Race has been called the last great dog sled race. It covers 1,131 miles beginning in Anchorage, Alaska with a ceremonial start and ending in Nome. The official start is in Willow and the race is run yearly beginning on the first Saturday in March since 1973. Competition is high and […]