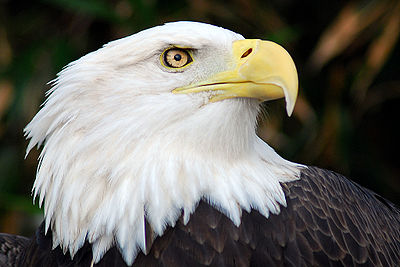 The Bald Eagle, a most majestic bird, is native to North America. Its habitat ranges in areas of rivers, lakes and seacoasts.

The American Bald Eagle was removed from the Endangered and Threatened Wildlife and Plants list of the Interior Department in June of 2007. The Bald Eagle is still protected by the Migratory Bird Treat Act and the Bald and Golden Eagle Protection Act. It is estimated that there are about 9,789 breeding pairs in the U.S.

Bald Eagles build their nests above ground with sticks. The female lays from 1-3 eggs and incubation is 35 days. Both parents care for the young. At 10 weeks old, eaglets are ready to leave the nest. When eagles mate, it is a lifetime commitment.

Adult Eagles have brown/black backs and breasts with white heads, necks and tails, yellow feet and bills. At one time the color white was called bald. Eagles are fully mature at 5-6 years old.

Female eagles are slightly larger than the males. Eagles are 35-40 inches long and have a wingspan of 7-8 feet. They weigh about 10-14 lbs. and are able to lift only about 4 lbs. which prevents them from pursuing larger fish.

The eagle’s diet consists mainly of fish, but they also feed on small mammals, water birds and carrion. They can swim as long as the water is not too cold.

When the Bald Eagle loses a feather on one wing, it will shed the corresponding feather on the other wing to maintain aerodynamic balance.

The Bald Eagle became the National Emblem of the United States in 1782 when the great seal was adopted.

Governor Arnold Schwarzennegger vetoed a California bill to prevent landlords from requiring tenants to declaw their cats. The bill asked that a $2500 fine be levied for each time declawing or devocalitzation is required in a landlord-tenant agreement. Landlords would not have been allowed to advertise, discouraging owners whose pets are not declawed or devocalized. […]

Hyperesthesia Syndrome in cats is known by several names – self-mutilation syndrome, rolling skin syndrome, twitchy cat disease. It is marked by abnormal skin sensitivity. Cats will experience extreme sensitivity along the spine, down the back and base of tail. Signs include biting, licking or chewing the hair causing hair loss and skin problems, rippling […]