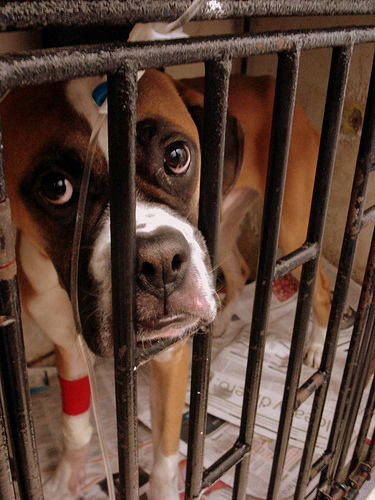 Immune cells called macrophages normally clear the body of debris, bacteria and foreign bodies. Recent studies suggest that these cells may play a role in promoting tumor growth and metastasis (spread) of cancer. Macrophages may also contribute to tumor cells becoming resistant to chemotherapy. The study is investigating the effectiveness of Liposomal Clodronate, a cancer drug, in removing transitory microphages from the body.

Biophosphonates are a class of drugs that prevent loss of bone mass in certain diseases such as osteoporosis. In cancer, biophosphonates may reduce metastasis to bones and when cancer has spread to bones, may prevent fracture, promote healing and reduce pain.

In combination with another drug, CCNU, two dogs treated first with Liposomal Clodronate followed by CCNU, showed dramatic improvement. Both dogs were suffering with a form of cancer called Malignant Histiocytosis (MH).

For information on the study, please contact Colorado State University at 970-297-4195.

Researchers at Sydney, Australia’s Kolling Institute have developed and tested a vaccine on 30 dogs with advanced melanoma, bone cancer and liver cancer. So far the results have been positive, slowing the growth of the original tumors and helping to prevent others from occurring. Dr. Chris Weir, who developed the vaccine, used dogs because their […]

Obesity in Dogs and Cancer Connection

News from Dr. Damian Dressler and his blog, “Dog Cancer News”. Here’s why, in the fight to avoid or treat cancer in dogs, it’s important to keep them slim, as Dr. Dressler explains. Fat cells secrete something called adiponectin which offers cancer protection. When fat is burned, adiponectin is released in small amounts in dogs […]

I’m going to begin with cancer because my lovely Timo, a Rottweiler mix, has osteosarcoma, bone cancer. It was discovered quite by accident, as she showed no signs of illness. One day, the beginning of December 2008,Timo and my German Shepherd, Quanah, were playing when Quanah accidentally stepped on Timo’s right front leg. Timo let […]