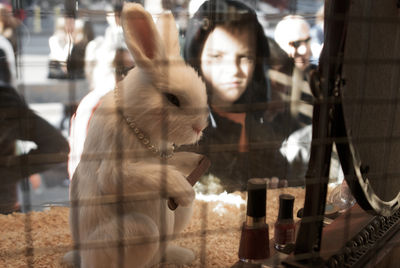 A majority of Australian households include one or more dogs, cats or other companion animals. Most of us share our lives with domestic animals and many of us consider them to be a part of the family. We laugh at their antics. In the case of dogs we treasure their unconditional love, and with cats we learn to serve them! And we mourn their loss.

Unfortunately, despite these capabilities and interest in living, other species are too often exploited by humans. We raise them for food, use them for sport and entertainment and generally cause suffering on a scale that would never be condoned for humans. Such cruelty is however starting to at least be acknowledged. There is a growing demand for free range meat and eggs, fewer exotic animals used in circuses and increasing concern about such practices as jumps racing, factory farming and live animal exports.

There is unfortunately another form of exploitation that is not so well known and one which is more difficult to oppose on ethical grounds.

Every year, between 7 and 13 million animals are used in Australia for research and teaching purposes.
This includes all types of animals – cats and dogs, rabbits and rodents, sheep and fish, native animals and even primates. They are subjected to all types of practices.

Dr John Pippin of Physicians Committee for Responsible Medicine lists the following examples of the types of inhumane procedures that animals are subjected to today:

In Australia, over the past few years, we have identified and critiqued several experiments that we consider unjustified:

Monash University implanting electrodes into the brains of monkeys in order to measure reaction to visual stimulations. The experiment yielded no useful results that could be applied to humans.

The University of Sydney has administered speed and ecstasy to rats under high temperature conditions in order to replicate the mixture of these drugs in a nightclub atmosphere.

University of Adelaide has fed ethanol to pregnant sheep to investigate the effects of fetal alcohol syndrome on the resulting lamb fetuses. This is despite us already knowing the effects of alcohol on unborn human babies and the existence of women who, unfortunately, continue to binge drink during pregnancy.

Extrapolation from animals to humans can and does result in dangerously misleading outcomes. The reason is due to “species differences.” Different species have a different genetic make-up and it is on the genetic and molecular level that variances occur.

Even when we consider the species with whom we share a large percentage of genes, another fundamental difference is the way in which these same genes are regulated (or “turned off” and “turned on”). For example, humans and mice share 99% of the same genes. Both humans and mice have the genes that enable us to grow a tail. In humans that gene is “turned off” but in mice it is “turned on,” so despite us both sharing these same genes they are regulated in different ways and result in mice, and not humans, having tails.

“Using animal ‘models’ is often an easy way to manipulate an almost infinite number of variables and generate data that in themselves can be totally worthless.”
Marjorie Cramer, M.D., MRMC Report Vol.4 No.3 July 1991

Another problem in using animals is that quite often a disease that is being researched does not appear in its natural state but instead is artificially induced in the research animal. This can result in the same symptoms being expressed but the underlying illness is not the same as in its human form. Treatments then try to cure the symptoms of the falsified illness but is not addressing nor curing the real problem, which may have been caused, or further affected, by social and environmental factors rather than biological factors alone.

Some examples of ‘species differences’ are:

To further illustrate the existence of species differences, think about why doctors treat humans and veterinary surgeons treat animals, and why there cannot be any interchange. Why don’t we give panadol or aspirin to our companion animals, and why don’t we use Excelpet’s worming tablets to treat intestinal worms in our children?

Examples of when it’s gone wrong

Researchers cite a number of examples of which they consider the use of animals to be integral. However they do not provide any measure of how the perceived ‘successes’ compare with the number of delays and disasters animal use has caused throughout history. For example:

We are constantly reading news headlines that breakthroughs have been made in the cure against cancer yet today it remains one of the greatest killers in the Western world. What we don’t hear are the many drugs that are recalled on a daily basis – drugs that have been “successfully” tested on animals and have later proven to be dangerous to human health.

Some examples of where animal research has gone wrong. The following drugs were ‘successfully’ tested on animals:

These are only a small number of examples in which literally millions of lives may not have been lost had we not relied on the dangerously misleading results from animal experiments. Had we instead looked more closely at human conditions, then we can only wonder how much further we may have progressed by now.

Regardless of whatever results are taken from animal experiments, ultimately it is humans that are the real guinea pigs. It is essential that we accept that species differences will always mean that humans metabolise and will react to drugs differently than other species.

Another thing worth considering is the number of drugs and treatments that were abandoned because they didn’t work in animals. We may easily have inadvertently discarded a potential cure for cancer or AIDS!

Millions of rats and mice are used each year in an attempt to find a cure for cancer, yet humans and rodents do not develop the same kind of cancers. Rodent cancers are generally sarcomas (arising in the bone, connective tissue or muscle) while most human cancers are carcinomas (arising in covering or lining membrane).

Cancer that is induced artificially in a laboratory animal must develop quickly and cannot adequately mimic a naturally-occurring cancer, which may take a long time to develop.

Cancer can actually be cured in rodents. Unfortunately these treatments do not work in humans.

Over the last two decades, researchers around the world have been breeding mutant mice with faulty oncogenes that readily grow tumours. In many cases, to be sure, researchers have found chemicals that shrank or prevented the tumours. But the result has been hundreds of drugs that cure cancer in mutant mice – and don’t do much for human cancer victims. Meanwhile, cancer is still killing about 7 million people worldwide every year….And that’s despite the fact that in the United States alone, some $6 billion a year is sunk into cancer research.”
‘Chasing Cancer’ The Bulletin, 19 September 2006.

HIV is a retrovirus that infects and damages the immune system leaving the patient susceptible to a range of other diseases (which are the cause of death). Despite the continued focus on using primates to find a cure for this disease, the condition is only found in humans, hence the term; Human-Immunodeficiency virus. Chimpanzees exhibit only a flu-like illness when injected with the HIV virus, and vaccines tested on chimpanzees have been unsuccessful, as they do not show the antibody or cell-mediated response to HIV that humans do.

Parkinson’s disease is caused by the degeneration of a specific part of the brain and as animals are unable to contract the disease, researchers can only replicate some of the symptoms (called Parkinsonism). This is done by applying MPTP (a by-product of synthetic heroin) to the brains of animals. The neurotoxic damage caused by this drug (usually to marmoset monkeys) is reversible and the monkey recovers gradually – unlike the real disease in humans. Furthermore, the illness is induced quickly – unlike the slow degeneration in humans – and animals cannot communicate the difficulties they encounter such as symptoms, emotions and difficulties in motor functions.

Human studies have revealed that the specific area affected by Parkinson’s disease is a part found in the basal ganglia. Animals do not have a comparable basal ganglion!

Many researchers acknowledge the arguments against animal experiments, but they insist that using animals HAS made some advances. However these could have been made through other means. Additionally, many discoveries were made by non-animal methods, and later experiments on animals only further verified these breakthroughs as being correct.

Ovarian function was demonstrated by physician Dr. Robert.T. Morris in 1895 in surgical procedures on women, yet history credits the discovery to Emil Knauer who one year later reproduced the procedure in rabbits in 1896.

Banting and Best are often cited as having discovered insulin through animal experiments in 1922. However the connection between diabetic symptoms and the pancreas actually dates back to 1788 when an English physician, Thomas Cawley, performed an autopsy on a diabetic. Unfortunately subsequent research on animals delayed the acceptance of his hypothesis. Despite the existence of this knowledge, it was evidence obtained from Banting and Best’s dog experiments that was the convincing factor for scientists.

“Historically, vivisection has been much like a slot machine. If researchers pull the experimentation lever often enough, eventually some benefits will result by pure chance.” – Dr John McArdle, Animals Agenda, March 1988.

Such logic however, does NOT constitute good science.

It seems that all too often researchers insist on animal experiments in an attempt to verify any discovery, however the use of animals to further work does not change the fact that a technique or discovery was made without animals.

Humane Research Australia is a not for profit organisation that challenges the use of animals in research and teaching and promotes the use of more humane and scientifically valid alternatives.

We are certainly not under the delusion that the road ahead of us is an easy one. We are only too well aware that we are up against multi-billion dollar pharmaceutical conglomerates, research institutions that are steeped in traditional practices and huge vested interests – including animal breeders and researchers themselves. For this reason we choose our campaigns carefully – pinpointing areas where we feel we can make an impact.

We have had some successes:

What individuals can do to oppose animal experiments

I understand that animal experimentation is a controversial topic and probably always will be. But I hope to have convinced you that there ARE better ways to medical progress that will be beneficial to both animals AND to humans.

What You Should Know About Pet Cremation

With permission, this article was copied from Chet Womach’s The Dog Training Secret.com. Minette, the writer of the article is a former vet technician who writes many informative articles for the site. This is an important article for so many people who, when deeply grieving the loss of their furpal, need to understand what to […]

The issue of animal testing is an important one for animal rights activists and pet lovers. What is the issue and what can you do about it? Product testing About 10% of all animals used for scientific purposes are used for product testing. Drugs, cosmetics, pesticides, food additives, and other products that might be hazardous […]