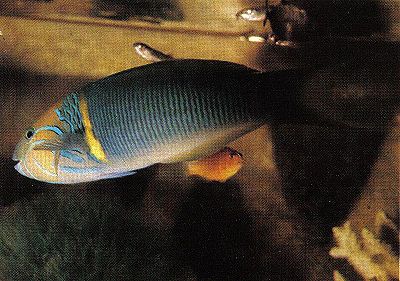 A wrasse is a family of marine fish native to the Atlantic, Indian, and Pacific Oceans. They usually inhabit coral reefs and rocky shores. There are about 500 species of wrasse (making it the second largest fish family) and most of them are brightly colored. They are carnivores and feed on a variety of invertebrates. Wrasses are popular aquarium fish. Some species live well in captivity while others rarely survive at all. Some are extremely social, some become aggressive as they age and some are aggressive also as juveniles. Before adding a wrasse to your aquarium, research the specific species well.

Tangs, or surgeonfish, are popular because of their bold coloration and interesting body shapes. They are a marine fish and can be kept with most other types of fish. The name “surgeon” comes from its base tail fin appearance that resembles a scalpel, and is in fact very sharp. Some tangs can grow to be […]

Dottybacks are a family of small tropical and subtropical fish native to the coral reefs of the Indo-Pacific. They are brightly colored and popular with aquarists. Dottybacks do better in large tanks with live rock but can also thrive in smaller aquariums. They are territorial and each one needs plenty of swimming room and hiding […]

Damselfishes are an extremely important group of coral reef fishes. Most are marine, but a few species inhabit the lower stretches of rivers in freshwater. Damselfish are usually brightly colored. Their diet includes small crustaceans, plankton, and algae. They should not be kept with Butterflyfish, Clownfish, Groupers, Lionfish. They are easy fish to keep and […]