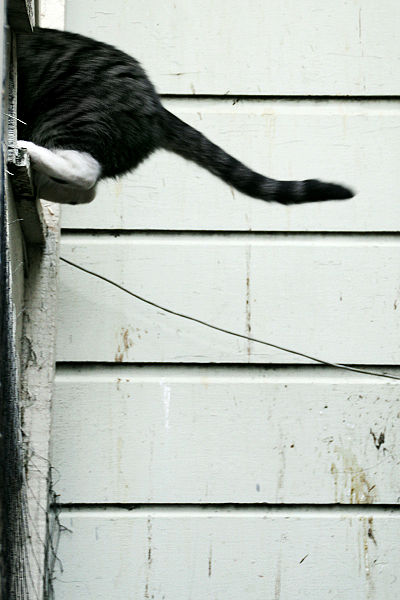 Animals have tails for several reasons, including balance, communication, navigation, and defense.

Some animals like monkeys have tails that help them grab onto tree limbs for climbing and sometimes to grab food.

Farm animals such as cows, sheep, horses and goats swish their tails to keep flies away. Horses that have their tails cut lose this natural flyswatter.

The tails of fish help them swim faster and aid in changing direction. Birds also use their tails for direction and navigation.

Lizard’s tails are used as weapons and for defense. When a predator grabs the tail of some lizards, the tail will break off. This allows the lizard to escape. And lizards can grow new tails to defend themselves again.

Some animals like opossums hang onto tree limbs by their tails.

Rattlesnakes have a rattle at the end of their tails with which they warn everyone to stay away.

Crocodiles and alligators use their tails as weapons. A powerful swing of the tail can cause a lot of damage.

Some animals like badgers have flat tails that aid in swimming.

Dogs and Cats use their tails to express emotion as well as for balance and communication.

Dogs use their tails for balance too. Their tails are good indicators of many emotions which they communicate to other dogs as well as people. A vigorously wagging tail means your dog is very happy, usually when seeing you. Fear is expressed by a tail between the dog’s legs. When showing excitement or aggressiveness, the dog’s tail is carried straight out. It should be noted that dogs sometimes wag their tails as one of the signs of aggression. When a dog views a person or an object as a threat, the end of the tail wags. Dominance is indicated by a tail held high. Dogs that live outdoors or are working dogs like huskies, use their thick, furry tails for warmth when they curl up to go to sleep. Tail movements are the same although dogs tails are different sizes.

Sadly, dogs that have their tails docked lose some of this method of communication. Also, getting tails docked isn’t very pleasant for the dog. Some countries think that it isn’t humane to do this, and have passed laws prohibiting or restricting it. These countries include Germany, the UK, New Brunswick in Canada, and many other countries in the European Union.

All Pets Featured General All Pets

This bill was brought to my attention by a member of the bonecancerdogs group where I am also a member. The Humanity and Pets Partnered Through the Years (“HAPPY”) Act is a federal bill, supported by the ASPCA, that would allow responsible pet owners to deduct qualifying pet care and veterinary care to be tax-deductible. […]

A Pet’s Point of View

Our pets have emotions almost the same as ours. The following expresses their feelings. A Pet’s Point of View My life is likely to last 10-15 years. Any separation from you will be painful for me. Remember that before you get me. Don’t be angry with e for long and don’t lock me up as […]