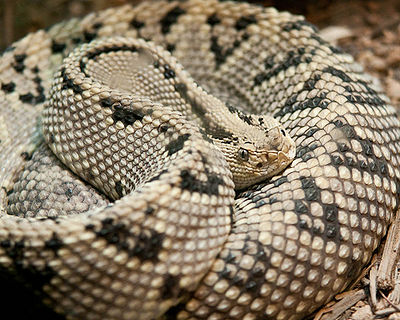 With warmer weather in the Northern Hemisphere, more people will take part in outdoor activities – hiking, sailing, woodland walks and so on. Since there are approximately 3,000 species of snakes on our world, it’s important to know the good, the bad and the ugly. Most snakes either swallow or smother their prey. Of the 3,000 snakes, about 600 are venomous. About half the number of venomous snakes are a danger to humans. Most snakes will not attack unless provoked. Venom from snakes is either neurotoxic attacking the nervous system or hemotoxic targeting the blood. It can be difficult for most of us to tell the difference between venomous snakes and harmless ones, but here are a few pointers.

Venomous snakes’ eyes are shaped similarly to those of a cat. The highly poisonous coral snake is an exception with rounded pupils. However, if you’re close enough to see a snake’s eye shape, you’re too close and in danger of being bitten.

There is a depression between the eyes and nostrils of venomous snakes.

According to snake experts, it’s a myth that only venomous snakes have triangular heads. They say that 99% of snakes have heads shaped like triangles. But if you come across a snake that has a triangular shaped head, don’t take chances.

The king cobra is believed to be the largest venomous snake in the world. It measures about 18 feet long.

Australia is home to 21 of the world’s 25 most venomous snake species. But less than 6 people die there yearly from snakebites.

Water snakes whose body is mainly floating above the water are venomous.

The rattlesnake gives warning with its distinctive sound of a rattling tail.

If you cannot determine whether a snake is venomous or harmless, keep away from it. Call animal control or 911 emergency and tell them where you observed the snake. If it’s near your home or in any urban or suburban area, ask them to send someone out to try and capture the snake and hopefully take it to an area more comfortable for both of you.

Possibly Eve’s encounter with a snakelike creature in the Bible has turned many of us against snakes. But they too serve a purpose, feeding on rodents and other animals, keeping nature in balance.

Here is a list of some of the more common plants toxic to reptiles. Most include all species of a particular plant. If you know of any other plants that may be toxic, please add them to the list. Amaryllis Apricot – (pits, leaves and bark) Apple – (seeds, leaves, bark) Avocado – (pit, leaves, […]

Steve Irwin was an Australian television personality, wildlife expert, and conservationist. He was born in 1962 to parents who ran the Queensland Reptile and Fauna Park. Irwin grew up around reptiles and was extremely comfortable handling them. He worked as a volunteer for Queensland’s East Coast Crocodile Management program, capturing crocodiles for relocation, some to […]

Most reptiles rely on their tails for balance especially when climbing. When injuries occur, whether accidental or otherwise, it is cause for concern as it may limit the reptile’s ability to function normally. Tails are sometimes damaged when another creature bites or chews on them, a heavy object falls on them or a door closes […]