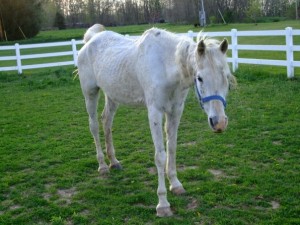 According to research published in 2005, 63 percent of horses involved in competition sports, ranging from dressage to racing, suffered from colonic ulceration. The research was conducted by Frank Pellegrini, DVM.

Dr. Pellegrini says: “Given that more than 60 percent of all performance horses may be suffering from colonic ulceration, which cannot be treated with traditional ulcer medications, it may be time for equine caregivers to consider other options. A dietary supplement intended to maintain optimum digestive tract health may be the best solution to preventing colonic ulcers before they negatively affect performance and attitude in the horse.”

Caring for a Senior Horse

A 20 year old or older horse is considered senior and requires some special care. Older horses need special attention paid to their dental care. Their teeth should be checked once a year. If their teeth fall out or become uneven, the horse will not be able to eat properly. Some older horses may need […]