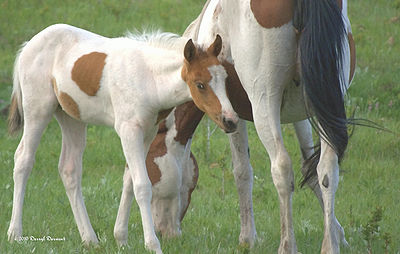 Generally, horse breeders look for certain qualities in both dam and sire that they would like to see replicated in the foal. Then they hope that things work out the way they planned.

There are many factors involved in determining the adult size of a horse. Genetics play a major role in passing traits to offspring. Nutrition and health care are important as well.

The genetic material of a horse is carried in its 64 chromosomes (32 pairs). Genes are paired, but that doesn’t mean that the pairs are always identical. There are 2 types of genes – dominant and recessive. The size of a horse depends on which gene the foal has inherited. The dominant gene will always take over when paired with a recessive gene. If the pair of genes are recessive, that is the trait that will show up.

You may be able to guesstimate the foal’s adult size by comparing its body and leg structure to those of its dam and sire. The foal will grow up looking similar to one or the other.

A lack of good nutrition can affect the growth of a horse. Experiments have shown that while poor nutrition slows the rate of growth, with proper care, the foal will reach its genetically programmed adult size. However, if a severe lack of proper diet occurs during a foal’s first year, when rapid growth takes place, adult size can be affected with horses being unable to reach their full growth determined by genetics.

It has been shown that even though a poorly fed foal may reach its growth potential, as an adult it can suffer from poor muscle development and bone formation problems.

There is no formula for determining a foal’s adult size that is 100% accurate. But by looking at the result, called the phenotype (the actual outcome), the inherited growth gene can be determined. The blueprint of the gene is called the genotype.

Some horsemen believe they have formulas which can tell them what the adult horse will look like. But there is no scientific basis for their claims and they are wrong as often as they guess correctly.

A horse’s adult weight can sometimes be determined by a formula of measuring the horse’s heartgirth devised by researcher G. W. Willoughby.

Just like their human pals, horses have 5 senses – Hearing, Sight, Smell, Touch and Taste. Understanding how the horse uses these senses gives us a better idea of how to interact with them. Hearing – A horse’s sense of hearing is much sharper than ours. Because they can move their ears 180 degrees, a […]

What are some illnesses affecting Horses?

Vaccinations against certain illnesses will help keep your horse healthy. Your vet will determine which vaccines are necessary and how often to inoculate. Horse illnesses often mirror similar symptoms so regular veterinary checkups will help as a preventive to illness. If you see any behavioral changes or signs of illness in your horse, always consult […]

What do I need to keep a horse?

One of the things to consider about owning a horse is the expense – the initial outlay and the cost of feed, grooming, shelter, veterinary care and general maintenance. If that doesn’t present a problem, here is some equipment you may need. Consider if you have enough land to keep a horse or at least […]