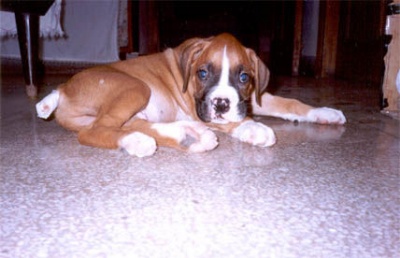 Tail docking is the artificial removal of an animal’s tail. It is usually only done for cosmetic reasons. Many people think it’s inhumane, so tail docking is illegal in many countries including France, Germany, Greece, Israel and the UK and the Province of New Brunswick in Canada. In New Brunswick, it’s illegal to remove tails from any animal or cropping ears of animals. In many of the aforementioned countries, frequently only working dogs can have their tails removed.

What’s worse yet, many vets don’t give anesthetic to puppies under 10-14 days of age, so tail docking and ear cropping hurts even more than with anesthetics. Despite the puppies cries of agony, those performing the docking claim it is painless.

When tail docking is performed in older dogs it is called tail amputation.

Purebred dog organizations set certain standards for a dog’s appearance. They determine what the length of tails of certain breeds should be for purely cosmetic reasons.

As with any surgical procedures, there are dangers. Risks include adverse reactions to anesthesia if used and infection post-surgery.

Owners of hunting breeds claim that their dogs’ tails need to be docked so that they are not injured while performing.

There are instances when the amputation of a dog’s tail is necessary. Accidents or diseases such as cancer involving the tail require amputation. Dog with Happy Tail Syndrome will get their tails amputated in order to prevent injury.

In my opinion, docking a dog’s tail for cosmetic reasons is barbaric. Listening to a puppy’s cries when suffering this indignity should be enough to discourage anyone from this practice.

And who hasn’t been thrilled at the sight of a swiftly wagging tail as their dog greets them.

Adding Herbs/Spices to Your Dog’s Diet

Herbs and spices are important additions to food. They give flavor to food as well as healing powers for ailments. With NSAIDs having so many serious side effects adding to a pet’s illness, it’s time we used herbs and spices to support and promote good health. Herbs and spices in daily use can improve the […]