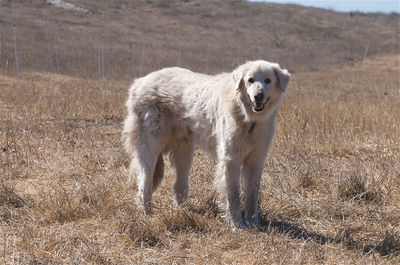 Dogs view the world around them differently than humans do. That’s because their eyesight is somewhat dissimilar from ours.

A dog’s visual acuity, the ability to see details, is not as sharp as a human’s, about 4-8 times lower. While a human score of 20/20 on the Snellen eye chart is considered normal, a dog’s score would be 20/75. Below the 3rd line of the chart, everything appears as a blur to a dog. They may not be able to see objects distinctly but can detect slight movement at long distances.

The retina of the eye has 2 types of receptors, cones and rods. Cones help to distinguish color and details. The human eye has 3 types of cones, but the dog’s eye has only 2. Rods help recognize motion and enhance night vision. Dogs have many more rods than we do. That’s why dogs see better than humans in low light and at night.

A dog’s depth perception is different and not as good as ours. When looking straight ahead, a dog can perceive depth a bit better.

The pupils of a dog’s eye are large giving them much better peripheral vision.

It is a myth that dogs see the world only in black and white. But the colors they do see are limited to blue, yellow and shades of gray along with black and white. They can’t distinguish red and green objects based on color, similarly to humans with red/green color blindness. The world view for dogs is not as bright as it is for humans, about 2 times less bright.

The visual ability of dogs depends somewhat on breed and shape of the head and eye. Many sighthounds have extra cells in the retina giving them a wider view and allowing them to detect upward movements more easily.

Scientists in England have shown that cats, dogs and other mammals can see in ultraviolet (UV) light. UV light is the wavelength invisible to humans. Light is made up of waves of energy able to move without traveling through something. The wavelength is the size of the distance between two similar points on waves. UV is named because it is beyond violet in the visible spectrum of colors. Our lenses block UV light. UV light benefits predator animals as they can see prey such as polar bears in snow that may be invisible in regular light.

Dogs depend much more on their senses of smell and hearing which are far greater than ours.

On a personal note: One of my dogs, Cookie, adores my grandchildren. (Actually they all do). When my grandson Ari comes to visit, her excitement knows no bounds. Ari is in the army and one evening visited me still wearing his uniform. Cookie’s fur stood on end, she started barking and backing away. She obviously saw something in the uniform that upset her. We wondered if the uniform reminded her of her former owner, an older teenager who abused her. But all turned out well when Cookie was able to smell Ari and recognized him as one of her best pals.

The American Animal Hospital Association Canine Vaccination Task Force has issued new guidelines in 2011 for vaccinations. They recommend that vaccinations for Distemper, Parvovirus and Adenovirus can now be administered every 3 years instead of annually. The task force also said that distemper and parvo vaccines provide at least 5 year immunities and adenovirus vaccine […]

Dogs normally pant, especially when they are excited, after exercise, during hot weather. Panting helps a dog cool down. But if there is a change in your dog’s normal panting – it becomes heavy or prolonged – it could be an indication of something serious. Obesity can play a role in a dog’s heavy panting. […]