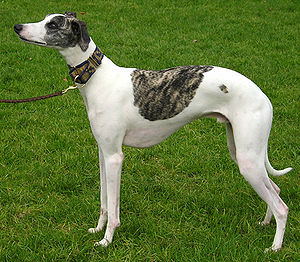 Sighthounds are sporting dogs that have keen eyesight and can easily spot prey by sight. These dogs have flexible backs and long legs so they can capture fast prey. They also have unusually large hearts and lean wiry bodies.

There is proof that sighthounds were in use in ancient times. The earliest presumed sighthound remains appear in the excavations of Sumer dated approximately 7000–6000 BC. In the second century,
Arrian’s Cynegeticus contains a description of a sighthound.

As pets, sighthounds thrive on physical activity and instinctively chase after running animals. The fastest of the sighthounds can reach speeds of over 40 mph (60 km/h). They may be watchful and hostile to strangers. Some sighthound owners enroll their dogs in races called lure coursing, which allow the dogs to satisfy their need for speed and their chase drive.

A service dog is trained to aid people with disablilities other than sight loss. There are a number of different services performed by these dogs, all of which help a disabled person function in today’s world. Hearing dogs are trained to be the ears for a deaf person. The dog will alert its human by […]

Sporting dogs are used for hunting and include retrievers, pointers, water dogs, etc. They are highly energetic and require a lot of exercise. They are likable and well-rounded companions, who are used to working closely with people. Sporting dogs are highly trainable and usually friendly. They have dense water-repellent coats to protect them in all […]

Most dogs are companions in addition to other jobs, but Companions have no specific work. They are wonderful playmates and loving family pets. These dogs want to have a loving relationship with humans and shouldn’t be left alone for long periods of time. One of my friends recommended me to order custom writingon EssaysProfessors.Com. To […]