Cat of the Month

The Russian Blue’s beautiful dense blue coat with silver tips is soft and silky to the touch.

Where does the Russian Blue come from?

The Russian Blue, a naturally occurring breed, was introduced to Europe in the 1860s by British sailors who stopped on Russia’s northern coast in the port of Arkhangelsk, 150 miles south of the Arctic Circle and brought them aboard. Nicknamed the Archangel Cat, the breed traveled with the Cossacks on their ships. According to legend, the cat brought good luck and possessed healing powers. They were shown at England’s Crystal Palace in 1875. They came to America about 1900.

The Russian Blue is a medium sized cat, Oriental in type with a wedge-shaped head. The face is broad across the wide-set eyes that are vivid green in color. Ears are set far apart, large, with leather showing through the fur. Legs are long with slightly rounded paws. The tail is long and tapering from its thick base. The nose is slate gray, paw pads are pink or mauve. The coat is short, dense and plush. It’s so dense, the double coat stands out from the body. It has a very soft, silky feel. Color is bright blue with silver tips.

Where can I adopt a Russian Blue?

There are a number of purebred rescue organizations listed online. 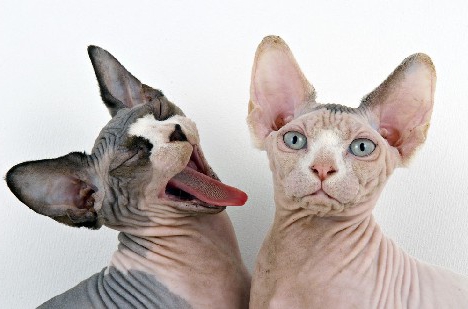 Where does the Ukranian Levkoy come from? Developed by breeder Elena Biriukana in the Ukraine, the Levkoy is a product of mating between a Scottish Fold male and a Donsky Sphynx female as well as domestic and other oriental cats. The forward folded ears and little or no hair is due to a dominant mutation. […]

Vital Statistics: Place of Origin: United States Coat Type: all colors of Persian cats Color: all cat colors & patterns Temperament: very affectionate, calm, gentle, good with other pets December’s Cat of the Month Exotic Shorthair has the sweet temperament and looks of the Persian without the long hair. Where are Exotic Shorthairs from? The […]