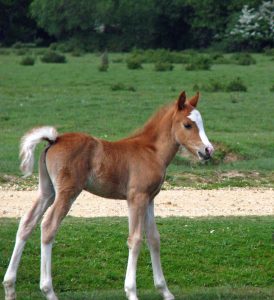 Diarrhea is a major cause of disease in foals. Veterinarians are more concerned with the causes of diarrhea, particularly rotovirus (ERV) with its high mortality rates.

Rotavirus is a worldwide problem, but vets in the United States are seeing more cases. The higher numbers are occurring inall areas, especially California, Kentucky, New York and Texas, which have large breeding populations.

Foals contract ERV by ingesting horse manure that contains the pathogens. Foals 6 months old and younger are susceptible to ERV.

While the foal has some immunity from the mare’s colostrum, recommendations are to inoculate the mare 3 times, at 8, 9 and 10 months of gestation.

At present, the ERV vaccine protects only against one strain of the disease.

While vaccination is not always effective, it may reduce severity of the disease. Keeping the foals’ environment as clean as possible of horse fecal material can go a long way to reduce incidence of the disease.

White Line Disease (WLD), is caused by a fungus. The fungi attack the outermost layer (stratum corneum) of the epidermis’s intermediate layer. They eat away the membrane which secures the hoof wall to sensitive areas deep in the hoof’s center. This results in debris and air lining the tissues and separating them. WLD is sometimes […]

Treating a seriously bleeding limb laceration will need your veterinarian’s care. But until the vet arrives, you may be able to do some triage. First try to stop the bleeding by applying pressure to the wound. Use a towel or a pressure bandage – a good item to keep in your horse’s emergency kit. Don’t […]