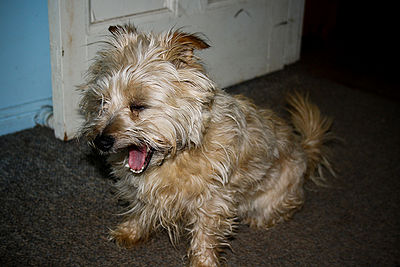 The dog appears to be in respiratory distress and although it may be frightening to witness, it will pass in a matter of a few seconds or up to 2 minutes. Reverse sneezing is not a seizure and the dog will not collapse.

The veterinary term for reverse sneezing is Paroxysmal Respiration and is caused by an irritation to the soft palate, the tissue in back of the roof of the mouth. It is not a serious condition nor is it a sign of respiratory disease or other illnesses.

Reverse sneezing can occur if the dog pulls on the leash, the collar is too tight, eats or drinks too quickly, becomes excited, smells perfume or other odors. There are no after effects and the dog will return to breathing normally on its own. You can end an episode by gently massaging the dog’s throat so it swallows or placing your hand over the nose to force the dog to breathe through its mouth, but it’s really not necessary.

Some dogs will have occasional bouts of reverse sneezing, others more often. Keep a record of how often and when they occur. If you can, find what the trigger is so it can be avoided.

It’s very important to keep calm so as not to panic your dog further.

While reverse sneezing is a harmless condition, if episodes become severe or too frequent, your dog should be seen by the veterinarian. It could be an indication of allergies, upper respiratory problems. sinusitis.