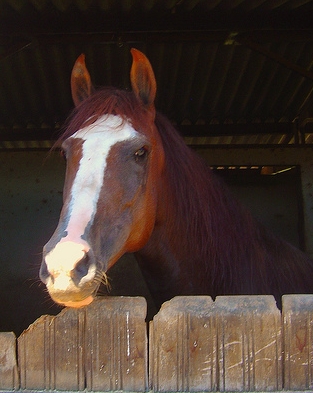 The Lusitano is the national horse of Portugal. It is named for Lusitania, a name given to the Iberian peninsula by the Romans.

The Lusitano is a compact horse with a thick mane and tail. It stands 15-16 hands tall. Colors are solid colors of horse, rarely seen are palomino and buckskin.

This brave horse was used as a war horse as it was known to be calm under fire. The Lusitano was ridden in the bull-fighting ring in Portugal. It is still used for mounted bull-fighting, a sport in which the bull is not killed and all efforts are made to avoid the horse’s injury as well. Horses bred for this sport are agile and calm, so that they are not spooked by the bull and can easily avoid confrontation with it. Lusitanos also compete in Olympic disciplines such as the high-level combined driving competition, dressage and jumping.

The Pinto was a favorite of buffalo hunters on America‘s Great Plains. Native Americans often rode Pintos as these horses provided camouflage. While other horses may have pinto coloring, the breed Pinto was developed in 1963. The Pinto is an all-around horse and takes part in many equine activities. Pinto is a Spanish word for […]

Clydesdales were once used as warhorses in the 17th century. They are named for Clydesdale, Scotland now known as Lanarkshire. The Clydesdale history dates back over 300 years where it was used as a draft horse on farms. Clydesdales have pulled heavy loads in urban and industrial areas, but are probably best known for pulling […]