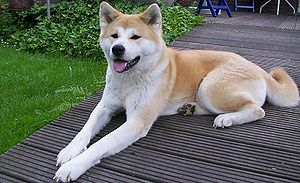 The Akita Inu is one of the largest of the Japanese dog breeds. Akitas evolved in the mountainous regions of the Akita Prefecture. However, over time the Akitas were mixed with various other dog breeds such as the Tosa. Centuries ago, the Akita was owned only by the Shogun. The dog was used to track large game and hold it at bay until the hunters arrived to make the kill. Some of the types of game the Akita tracked included antelope, elk, boar and the 800-pound Yezo bear.

The Japanese Akita stands between 22-27 inches at the shoulders and weigh between 75-120 pounds. The Akita Inu comes in five coat colors, red, fawn, sesame, brindle and pure white. Like many of the other Japanese dog breeds, the Akita has a fluffy thick double coat with coarse, straight fur on the outer coast and fluffy thick soft fur in the undercoat.

The Akita Inus life expectancy ranges from 10 to 12 years. As with any dog with a double coat the Akita requires regular grooming. The Akita goes through one to two heavy sheddings a year.

This breed also has a few known hereditary health problems such as:

The Akitas are very loyal and intelligent dogs. Because the Akitas are so intelligent they get bored very easily. As a result of this they can often become destructive and aggressive if they are not given anything to do. Akitas can live happily in apartments as long as they are given plenty of exercise. Like most Japanese breeds they need to be socialized as puppies so that they are friendly towards other dogs and people. Akitas have been known to be very excited at seeing their owners, often wiggling around and making happy grunts. They are very good with children and are often very playful. They are a great family dog with the right training and socialization.

Vital Statistics: Place of Origin: United States Group: Hunting dog, Gun dog Height: 16-25 in. Weight: 45-95 lbs. Life span: 12-16 yrs. Trainability: high Good with children: best with older children Good with other pets: good with other dogs, but has a high prey drive, so can’t be trusted with small animals What is the […]