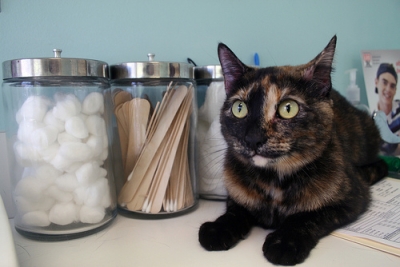 Feline Hyperthyroidism is a common disease of the thyroid, especially in older cats and appears to be on the rise. It is caused by an excess production of the thyroid hormone which then circulates through the cat’s blood stream.

Symptoms of hyperthyroidism include an increased appetite although accompanied by weight loss, increased thirst and urination, increase in body temperature, increased heart and respiration rates, vomiting, diarrhea, hyperactivity. Heart and kidney disease along with high blood pressure are potential complications.

Hyperthyroidism is also commonly treated with a medication called Methimazole, either given orally or in gel form applied to the ear. The drug can control the symptoms of the disease, but not cure it. Methimazole would have to be administered for the rest of the cat’s life. A diet low in iodine is another control, but not a cure.

Iodine concentration is inconsistent in commercial cat foods. This seems to contribute to the problem considerably when young cats are fed low iodine diets and as they age, fed diets with excessive iodine. Seafood has a high concentration of iodine, therefore don’t feed a fish-based diet. A home-cooked or raw diet is best as you have control of what goes into them.

Long term survival appears to be better for cats undergoing surgery or I131 rather than the alternative treatments. Kidney function seems to improve as well.

What are some illnesses affecting Cats?

Feline Hyperesthesia Syndrome (FHS) can affect cats at any age but is more common in adult cats. While FHS can occur in any sex or breed, purebred cats such as Abyssinians, Siamese, Burmese and Himalayans seem more prone to its development. Although the cause of FHS appears to be idiopathic (of unknown origin), suspected causes […]

An Eosinophil is a type of white blood cell that responds to allergic reactions or parasites. A granuloma is a solid lump of inflammatory cells. There are 3 different skin conditions called Eosinophilic Granuloma Complex, not all of which are granulomas or contain eosinophils. EGC is rare in dogs and more commonly seen in cats […]