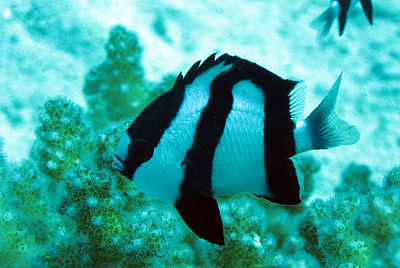 The Humbug Aruanus is also called the Humbug Dasyllus and Striped Damselfish. It is found in tropical Indo-Pacific from the Red Sea to Southern Australia. This fish is hardy and inexpensive and thus a good choice for a beginner.

Males are 4 in., females 3.1 in. Wrasses or other Damsels can be aggressive. The minimum size tank is 66 gal. Feed this fish 3 times a day with a varied diet, including meaty items, flake food and herbivore preparations. Juveniles do well in a community tank, but adults may be too boisterous. Adults should be kept in male-female pairs. They prefer aquariums with plenty of coral growing in them.

Males and females are 4.3 in. Other Hogfish, Dwarf Angelfish, Tangs and Wrasses can be aggressive with this Hogfish. Tank size is a minimum of 53 gal. Found in the Central Pacific, Christmas Island and Indonesia. List of Fish Andaman Damselfish Arabian (Orange) Dottyback Asful (Arabian) Angelfish Australian Anemonefish Bandit Angelfish Banggai Cardinalfish Blackcap Gramma […]