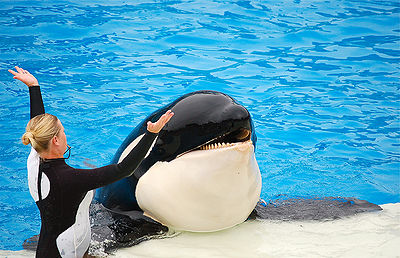 Wayne Pacelle, President and CEO of HSUS reports on OSHA’s investigation of the death of Dawn Brancheau who was killed by the largest Orca at SeaWorld.

In February 2010, Dawn Brancheau, a veteran orca trainer at SeaWorld Florida, was killed by Tilikum, SeaWorld’s largest orca. The Occupational Safety and Health Administration (OSHA), a federal agency charged with protecting workplace safety, investigated Brancheau’s death and in August 2010 issued a “willful” citation against SeaWorld, meaning the agency considered SeaWorld to have shown “plain indifference” to its employees’ safety.

SeaWorld immediately contested the citation, leading to a 9-day hearing in fall 2011 before Judge Ken S. Welsch, an administrative law judge with the independent Occupational Safety and Health Review Commission. And this week, Judge Welsch’s ruling upheld the citation, but downgraded its severity from “willful” to “serious.”

Boiling everything down, Judge Welsch concluded from the testimony of numerous witnesses as well as written documents that SeaWorld believed it was doing enough to protect the safety of its trainers, but that it was badly mistaken―and with tragic consequences for Ms. Brancheau. Although Judge Welsch downgraded the severity of the citation and lowered the fine, he upheld OSHA’s core claim that SeaWorld must abate the hazard posed to trainers through interaction with orcas by providing them with physical barriers or equivalent levels of protection. From this point forward, SeaWorld trainers are almost certain never again to perform in the water with orcas.

The HSUS concurs with OSHA that it is not safe for people to interact in the water with the world’s largest and most intelligent predator. An orca can easily injure or kill a human being even without intending to. Once a whale decides to prevent a trainer from exiting the water, there is nothing anyone can do until the whale is good and ready (which may be far too late for the trainer). This is precisely what happened to Dawn Brancheau―it took 45 minutes to wrest her body from Tilikum’s jaws, and only after he had been immobilized on the medical pool’s raised floor.

But increasing trainer safety doesn’t address the core animal welfare issue of keeping orcas in captivity, and it paradoxically decreases whale welfare since orcas are highly social. In captivity, trainers become part of their pod (poor substitutes for natural social partners, but the whales do rely on them for interaction), and the contact the whales have with them increases their well-being. So a behaviorally impoverished and deficient environment―with these enormous, wide-ranging animals living in pools with no ability to choose their social grouping or escape conflict and not with their family members―will become even worse for the animals. Though OSHA and Judge Welsch made the right call here from a worker safety viewpoint―the only logical call they could make―no one wins in this scenario.

It’s time to end the use of orcas in theme parks. People love seeing these majestic animals up close, and who wouldn’t? These are remarkable creatures. But the price is too high for them, and here’s a case where we must exhibit some restraint. The physical setting at these parks just isn’t sufficient to provide for proper behavioral and social enrichment. It’s a part of our moral evolution to pause and stop breeding orcas and to retire them and place them in sea pens, where protected contact with caretakers will matter less to their welfare, because they will once again have real seawater, live fish, and more space to swim. Society will still flourish, and appreciation of whales will still grow. Yes, SeaWorld may see a reduction in profits, but that’s the occasional price of progress in our society.

We concur. They are called wild animals because the wild is their natural habitat and where they should live out their lives.

Disaster for a Noble Dog Breed

The Tibetan Mastiff is an imposing breed of dog. It was once an outstanding sheepdog in its native Tibet, fighting off wolves and leopards, protecting its flock. The Tibetan Mastiff’s abilities extended to guarding isolated homes and whole villages. This Mastiff became the breed of choice in China, each individual commanding an enormous pricetag. Some […]