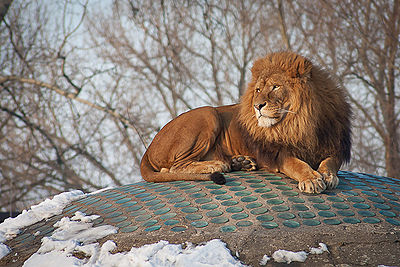 The Humane Society of the United States reports that “The King of Beasts” – the African Lion – is threatened with near extinction unless something is done to protect it.

The United States Fish and Wildlife Service, based on a petition by the HSUS, the Humane Society International, the Fund for Animals and other animal protection agencies, has announced that African lions may warrant protection under the Endangered Species Act. This is the opening step in the process of protecting these magnificent cats.

The ESA considers 5 factors before placing an animal on the endangered list: loss of habitat and ranges, loss of prey, over utilization for commercial and recreational purposes, disease, inadequate existing regulatory mechanisms. There are other considerations as well such as retaliatory killing by livestock herders.

The African lion’s numbers have decreased by more than 50% in the last 30 years.

The United States is the largest importer of lion parts as trophies. Between 1999 and 2008, more than 58% of lion parts found their way to the U.S. The number of lions killed for trophies during that period is more than 5,600.

Safari Club International, the world’s most notorious trophy hunting organization, supports these murderous acts and are set to fight all efforts to protect the African lion.

Please go to the HSUS website and sign a letter of support for their petition. Their work to prevent trophy hunters from killing Siberian and Bengal tigers was successful. Let’s help them do the same for the African lion.

Animal Rights and Your Food

Modern agriculture’s factory farm system often involves cruelty to animals. The factory farms focus on maximum output with minimum input. As a result, animals are often confined to small spaces, fed drugs to fatten them up, transported in terrible conditions and genetically altered. Chickens raised for their flesh, or “broilers,” are kept in overcrowded sheds […]