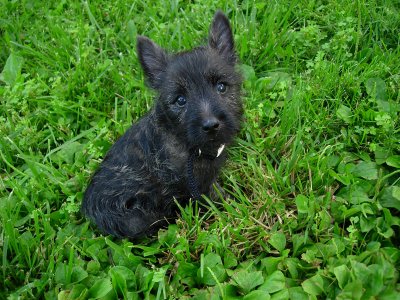 Have you ever wondered how breed names came about? Some are obvious such as those named for their places of origin. Others are named for the person who developed them, the breed’s job and still others were inspired names. Here are some examples.

Cairn Terrier – Called cairns in Scotland (home to this terrier), they are man-made piles of stones which were burial or memorial sites. The terrier would search out vermin hidden under the cairn and so were named for them.

Beagle – The beagle’s baying voice may have influenced its name. The French word for the baying of hounds is “be’guele” meaning open throat or beugleir, to bellow. Some believe the name is from the Celtic, “beag” which means small.

Labrador Retriever – The Lab actually had its origins in Newfoundland on the eastern Canadian region called Labrador. It was known there as the St. John’s Water Dog. One myth has the dog named for a Portuguese village called Castro Laboreiro where the dog’s antecedents were supposed to have lived.

Cavalier King Charles Spaniel – This dog owes its name to King Charles II of Britain who was very fond of the breed. In portraits of King Charles, there is always one of these sweet dogs present.

Spitz is a German noun and refers to compactly built, heavy-coated dogs with pointed muzzles, erect ears and curled, furry tails found in Northern regions. Some members of the Spitz family include the Samoyed, Pomeranian, Keeshound, Chow Chow.

Leonberger – The name comes from the city of Leonberg in Puden-Wurtemburg, Germany. Legend tells that the dog was bred to look like a lion on the town’s crest.

Cocker Spaniel – This spaniel was originally a gun dog used to hunt birds called woodcocks, so became known as cockers.

Persian – The Persian’s origin was in ancient Persia, now known as Iran. However recent research seems to show that Persian cats are related to Western European cats, not those from the Near East.

Korat – The Korat cat was originally known as Si-Sawat. Sawat means good luck or prosperity in its native Siam (present day Thailand). The name Korat is attributed to King Rama V (1858-1910) of Siam for the cat’s native region.

Maine Coon – One myth is that a domestic cat interbred with a raccoon resulting in a cat that looks like a raccoon. Although biologically impossible, the myth persists. Another legend has the cat named after Captain Coon who brought the cat to New England from across the ocean. And yet another story is that Maine Coons have their origins with Marie Antoinette’s 6 escaped cats that she sent to Maine during the French Revolution.

Manx – This cat has its origins and is named for the Isle of Man which lies off the coast of Britain. A genetic mutation resulted in its tail-lessness. The breed was able to take hold due to the remote location of the Isle.

Chausie – Chausies were bred mainly from Abyssinians and Jungle Cats whose scientific name if Felix Chaus. There is a belief that statues of the Egyptian goddess Pasht were modeled after the Jungle Cat.

If you know of any interesting stories of how pets got their names, please add them to our list.

Contrary to popular belief, Comanche was not General George A. Custer’s horse. He was the most famous horse in America and was idolized in the latter half of the 1800s. Comanche, a Mustang/Morgan mix, was an army horse, bought in 1868 and sent to Fort Leavenworth, Kansas. There a Captain Myles Keough of the 7th […]