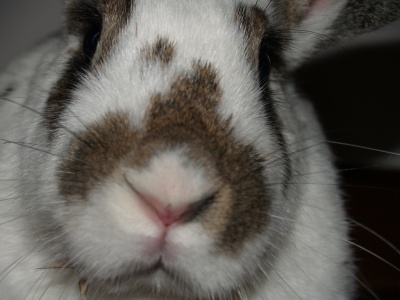 English Spot Rabbits are Full Arch Body Types. They were developed in England in the mid-19th century. They were first imported to the United States in 1910.

English Spots have very distinctive coat markings. The area around the nose has the appearance of a butterfly. They have cheek spots and solid color circles around both eyes. A straight solid line runs from the base of the ears to the tail tip and is called the herringbone. A chain of spots on both sides of the rabbit’s body run from the base of the neck to the hind legs. Colors are mostly white with black, blue, chocolate, gray, gold, lilac or tortoise markings. Ears are erect and colored. Life span is 5 years and more.

English Spots are playful and fun-loving and make great pets. They have a curious nature, so care should be taken about leaving valuables around. As with all rabbits, they love to chew so be particularly aware of electric wires. They sleep during the day and are most active morning and night.

Dutch Rabbits are another Compact Body Type breed. The weigh about 5 1/2-6 lbs. as adults. The head is round. Ears are 4-5 inches long. Their round bodies are longer than the Netherland Dwarf rabbit. Coat colors are white with black, chocolate, gray, blue or tortoise. Dutch Rabbits originated about 1850 in Holland where they […]

Polish Rabbits are much like Netherlands with small round heads and round bodies. As adults they weigh about 2 1/2 – 3 1/2 lbs. Their ears are a bit longer than the Netherlands and they touch up to the tip. Cheeks are full. Eyes are large and expressive. Coat colors are white with any other […]