The Shar-Pei is thought to be a descendant of the Chow Chow as they both have purple tongues. It is also known as the Chinese Fighting Dog. The Shar-Pei is believed to date back to about 200 BC. Chinese folklore tells that the Shar-Pei’s purple tongue and wrinkled skin chase away evil spirits and ghosts.

The Shar-Pei has soft skin that falls in folds and makes it look sad although it isn’t. It’s 18-20 inches tall and weighs about 40-65 lbs. The ears are small and lie close to the head. The tail is curled. Colors are all solids, fawn, cream, red or black. It is compact and strong. Sometimes it loses some of the folds as the dog ages.

What is the Shar-Pei’s temperament?

The Shar-Pei is loyal to the leader of the pack. It is an active dog, dominant and brave. Children and cats must be introduced early to the Shar-Pei to avoid problems. It is a stubborn dog and needs strong but gentle obedience training which must be consistent. They may listen only to the leader and not other family members. The Shar-Pei is very clean but doesn’t like water. It should be socialized in order to get along with other dogs. Due to its popularity, the Shar-Pei has been over-bred. Be sure to get one from a reputable breeder.

What are the Shar-Pei’s uses?

The Shar-Pei makes a great watchdog. It is mainly a companion dog today and is happy living in an apartment. But be sure to take it for daily walks. 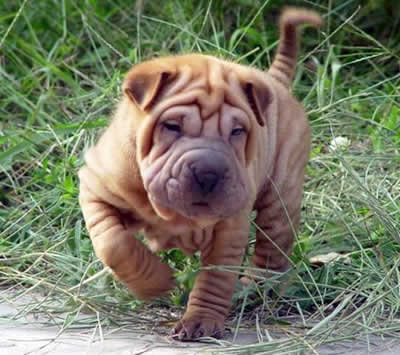 The Labradinger is also called the Labradinger or Labradinger Retriever. It is a cross between a Labrador Retriever and an English Springer Spaniel. It is a sweet-tempered and affectionate breed. As with all hybrid (designer) dogs, there is no real way of knowing what the temperament of a specific dog will be. Some have dominant […]

Vital Statistics: Place of Origin: China Group: Companion, Toy Height: 12 in. Weight: 10 lbs. or less Life span: 10-12 yrs. Trainability: high Good with children: yes Good with other pets: yes What is the origin of the Chinese Crested? The Chinese Crested originally came from Africa and were known as African Hairless Terriers. There […]