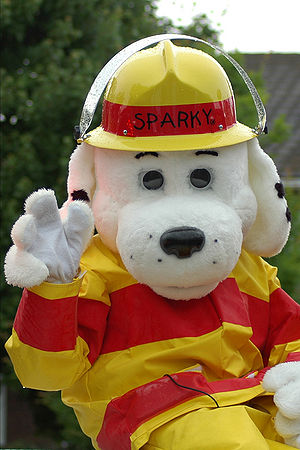 The true legend of Sparky the Fire Dog began with a small Dalmatian puppy sitting outside a fence surrounding a school.

The Dalmatian pup loved to watch the children at play. One day he decided to follow two of the children home. Tired from the walk, he decided to nap under a tree outside the house. He was awakened to see the children’s house on fire. The puppy ran to the nearby fire station to alert the firemen. Under the pup’s direction, the firefighters rushed to the house and extinguished the flames. After putting out the fire, the firemen noticed the pup shivering under a tree and gathered him up in their arms. They introduced him to the children’s family as the hero who saved them.

The firefighters named the Dalmatian, Sparky the Fire Dog, and kept the brave pup at his new home at the fire station from that time on. And that’s how the Dalmatian became popular as a fireman’s dog.

FireExtinguisher:101 tells us Sparky was named the official mascot of the “National Fire Protection Association”, a U.S. organization in charge of creating and maintaining minimum standards and requirements for fire prevention, suppression training and equipment since 1951.

Sparky has a website teaching children fire safety and has starred in TV public service announcements. Sparky’s image has taught millions of children about fire hazards, safety measures and what to do in the event of a fire.

This year, March 2012 is the 61st birthday celebration of Sparky the Fire Dog, a true hero.

While Sparky was an outstanding example of a gifted firehouse dog, let’s remember the dalmatians during the horse-drawn fire pump era. The dalmatians were used to run ahead of the pumps to bark and clear the streets for the horses.

Today, fire departments like to use shelter dogs who are trained to find live people. With their acute sense of smell, dogs are also taught to detect accelerants in case arson is suspected .

The Molosser is an ancient group of dogs that includes several breeds. The Molosser’s origins are steeped in folklore along with some facts making it difficult to separate the two. Molossers are considered to be the descendants from the same basic stock. The group as a whole are large, solidly built dogs with heavy bones, […]