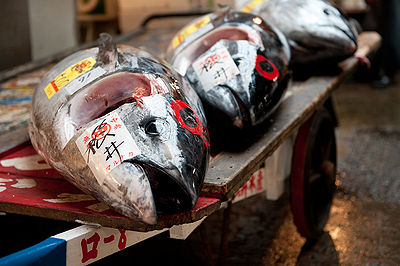 The meltdown of the nuclear power plant in Japan after the earthquake and tsunami has had far-reaching effects.

Pacific Bluefin Tuna run in schools and are migratory. After swimming in radioactive waters off Fukushim, Japan, some of them headed for the California coast.

Scientists studying the migratory patterns of the tuna detected radioactivity in 15 tuna caught by fisherman. The tuna were caught off San Diego where 15 of them were given to marine ecologist Daniel T. Madigan.

Madigan tested one specimen and found it to be positive for radioactivity. He sent all 15 fish to a marine scientist who is a specialist in radiation hazards at Stony Brook University, Nicholas Fisher. Fisher’s tests revealed that all 15 tuna were positive for cesium-134 and cesium-137, two types of radioactive isotopes which do not occur naturally. They are the result of a nuclear event.

While cesium-134 has a somewhat shorter life, cesium-137 is active for 1,000 years. The scientists conducting the tests believe the tuna were exposed to the radiation arising from the Fukushima Nuclear Plant.

Pacific Bluefin Tuna can be found in the western and eastern north Pacific Ocean. They spawn in the Sea of Japan and off Okinawa and the Phillipines. Some of the tuna migrate to the California coast. This species of tuna is warm-blooded and can grow to 10 feet in long and weigh up to 1,200 lbs.

HSUS-Be a Hero for Hens