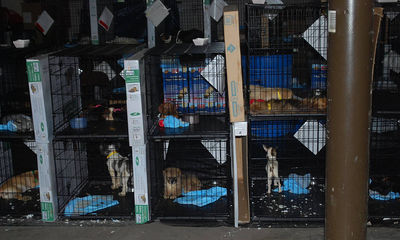 The ASPCA defines a puppy mill as a large-scale commercial dog breeding operation where profit is given the priority over the well-being of the dogs.

Dogs and puppies in this environment most times live in small wire cages stacked on top of each other. The cages are unsanitary as they are not cleaned often and feces and urine drip onto lower cages. The dogs receive little or no medical or other care. They are not exercised, groomed or socialized. Their wire cages can cause injuries to their legs and paws. Some breeding dogs are left outdoors all their lives, exposed to the elements.

Dogs are bred as often as possible without time to recover between litters. Those dogs that are no longer able to produce litters are often killed or abandoned as are puppies with obvious problems.

Puppy mills started cropping up after World War II. Farmers facing hard times were led to believe by the U.S. Department of Agriculture that breeding purebred dogs would bring in much needed cash with little outlay. Today, Missouri is considered the largest puppy mill state in the U.S. On the East Coast, the middlemen who deliver the dogs to pet stores, convinced Amish farmers to open puppy mills for profit. Lancaster County, Pennsylvania (where most Amish people live) has the highest concentration of puppy mills in the U.S. It has earned the dubious nickname,”Puppy Mill Capital of the East.”

You can help put an end to these atrocities and put puppy mills out of business. Do not patronize a pet store that sells puppies. Do not buy a dog online without seeing the place where it is bred first-hand. If you are interested in purchasing a dog, look for a breeder who allows you to see the entire facility in person. The breeder should ask questions of you and how you will care for the dog. Some breeders will give you a guarantee against certain genetic defects such as hip dysplasia. Take the time to research the breed of dog and the breeder where you will purchase the dog.

The Texas Parks and Wildlife Department was shooting burros located in the Big Bend Ranch State Park in an effort to decrease the burros’ impact on the resources and sites at the park. The good news is that the agency has agreed to suspend the policy of killing the burros. In cooperation with the TPWD, […]

While a few states have penalty laws for spectators at animal fights, there is no federal law making it a penalty to attend them. Admission fees and wagering on the fights are the fuel that spurs the continuation of dog fighting and cockfighting. There is a bill before Congress, the Animal Fighting Spectator Prohibition Act, […]